Meanwhile, west of Iraq a real civil war is brewing…
Palestinian youth called for an end to bloodshed today and said they would stone those who kept causing chaos. 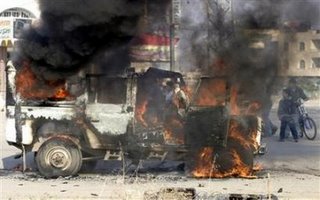 The children were protesting for peace and calm. They warned adults that they would stone to death the killers of the three children earlier in the week.
The Moscow Times reports:

In a sign of just how far security has fallen in the Gaza Strip, a group of children took to the streets Tuesday, burning tires and threatening stonings if the “adults” did not stop causing chaos.

Dressed in jeans and a blue shirt, Saeed Salem, 12, and his friends said they were enraged by the killing of three young brothers Monday and that they were fed up with the constant security nightmares that have marred their short lives.

“We are angry,” Salem said as he and his young colleagues set about burning tires in a central Gaza street. “We need those who killed the kids to be found and be stoned to death.”

His friend, Ahmed, his hands blackened from wheeling abandoned tires to the bonfire, said the adults were lost in rivalries and had abandoned the children and their interests. 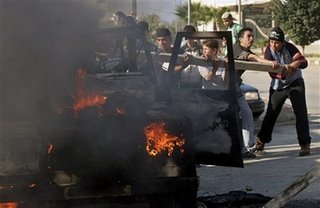 Palestinian youths destroy a jeep as it burns after being set on fire by militants after a member of the Al Aqsa Martyrs Brigades was killed by Palestinian security forces in the West Bank town of Jenin, Wednesday, Dec. 13, 2006. Gunfights erupted in the town, after the killing, which witnesses said was criminally motivated. (AP Photo/Mohammed Ballas)

A prominent Hamas-linked judge was forced to get on his knees and then gunned down outside of the courthouse where he worked today.

Later in the day a grenade blew up at a Hamas rally.

And, the current Fatah-Hamas violence is spreading to the Palestinian refugee camps in Lebanon.