Fausta and Babalu say, “Speak with your wallets folks!” 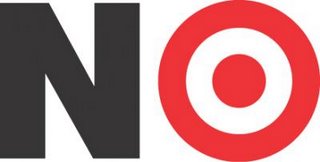 A. M. Mora y Leon at Babalu is reporting that Target stores (with Target’s name right on the package) are offering Marxist murderer Che Guevara CD cases this Christmas season for all of the Marxist revolutionaries on your gift list… Forget Tar-Jay… It’s Tar-Che!
(RedState has a photo of the actual case!)
Investors Business Daily reported this news yesterday:

Target, the retailer that distinguished itself last year by banning Salvation Army bell-ringers, has topped itself this yuletide by selling Che Guevara CD cases for a little tyrant-chic right under your tree.

The big box retailer has jumped onto the Guevara bandwagon, selling the murderous revolutionary’s image as if it had just turned its stores into Marxist rally stalls.

Although, these Che Guevara CD Cases are not available at the Target online store, there are a few other Marxist products online for you to choose from. Target Stores have teamed with Amazon.com to bring you these commie favorites:

Want to relax and enjoy a good read for cold nights in front of the fireplace…
How about Manifesto? 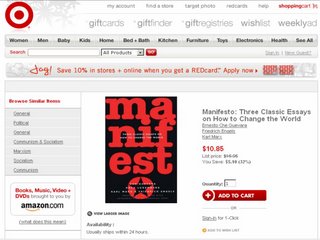 Manifesto: Three Classic Essays on How to Change the World

“Let’s be realists, let’s dream the impossible.” Che Guevara’s words summarize the radical vision of the four famous rebels presented in this book: Marx and Engels’ Communist Manifesto, Rosa Luxemburg’s Reform or Revolution and Che Guevara’s Socialism and Humanity. Far from being lifeless historical documents, these manifestos for revolution will resonate with a new generation also seeking a better world.

“The world described by Marx and Engels . . . is recognizably the world we live in 150 years later.”-Eric Hobsbawm

“Rosa Luxemburg was a brilliant, brave and independent woman, passionately internationalist and antiwar, a believer in the people’s ‘spontaneity’ in the cause of freedom; a woman who saw herself as Marx’s philosophical heir.”-Adrienne Rich

This classic is a favorite of every young Marxist in the family.

Are you the romantic type?
How about Loving Che? 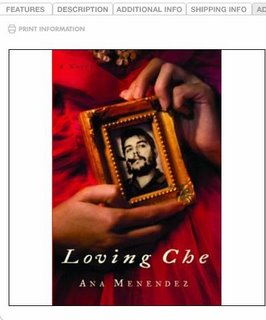 Get the juices flowing again with Loving Che.
The New York Times even gave it a good review- (figures):

A daring debut novel about a woman’s love affair with Che Guevara by the acclaimed young author of In Cuba I Was a German Shepherd.

Selected as a New York Times Notable Book of the Year, Ana Menéndez’s story collection In Cuba I Was a German Shepherd was hailed by the Times’s book critic as “powerful” and “achingly wise.” Now, in her first novel, Loving Che, Menéndez delivers an astonishing, intimate portrait of revolutionary Cuba as witnessed by an elderly woman recalling her secret love affair with the world’s most dashing, charismatic rebel, Ernesto “Che” Guevara.

Still haven’t found the right gift?
How about a Che Guevara calendar? 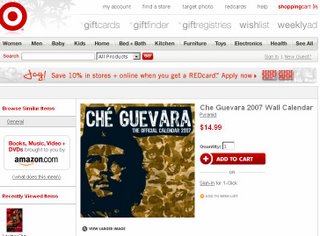 Now you can gaze at your favorite Marxist killer 365 days a year!
(This is especially popular with Leftist professors and certain peace protesters!)

Ordering is easy…
Although, Target has partnered with Amazon.com to bring you these products you still have to check out through your Target.com webpage.
Merry Marxist Christmas!

Update: Michelle Malkin is now reporting (12-22) that Target is removing the merchandise!