“I would add that this responsibility is not simply a matter of states being ready to come to each other’s aid when attacked – important though that is. It also includes our shared responsibility to protect populations from genocide, war crimes, ethnic cleansing and crimes against humanity.” 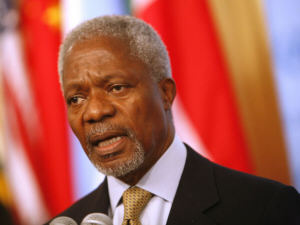 So long, failed and bitter Kofi.

HERE is Kofi’s farewell speech delivered today at a college campus in the same state where Winston Churchill gave his famous Iron Curtain Speech in March 1946.

But, unlike Churchill, Kofi’s speech was bitter and misdirected.
And, unlike Churchill, Kofi will go down as one of the most awful leaders in history.
Annan presided over the largest financial fraud in history and several genocides. Annan was unwilling and unable to confront the corrupt league of dictators and Jew-hating Islamofascists who roost at the UN.

My friends, we have achieved much since 1945, when the United Nations was established. But much remains to be done to put those five principles into practice.

Standing here, I am reminded of Winston Churchill’s last visit to the White House, just before Truman left office in 1953. Churchill recalled their only previous meeting, at the Potsdam conference in 1945. “I must confess, sir,” he said boldly, “I held you in very low regard then. I loathed your taking the place of Franklin Roosevelt.” Then he paused for a moment, and continued: “I misjudged you badly. Since that time, you more than any other man, have saved Western civilization.”

My friends, our challenge today is not to save Western civilization – or Eastern, for that matter. All civilization is at stake, and we can save it only if all peoples join together in the task.

You Americans did so much, in the last century, to build an effective multilateral system, with the United Nations at its heart. Do you need it less today, and does it need you less, than 60 years ago?

Surely not. More than ever today Americans, like the rest of humanity, need a functioning global system through which the world’s peoples can face global challenges together. And in order to function, the system still cries out for far-sighted American leadership, in the Truman tradition.

Why do I have a feeling that this is not the last America-Bush-bashing we hear from Kofi?

Maybe Kojo will pick him up in his Mercedes on his last day?

Jules Crittenden translates.
STACLU has a roundup on Kofi’s address.