These results from a World Public Opinion poll taken in Afghanistan show that an overwhelming majority of Afghanis are pleased with the job of President Karzai… And, a majority of Afghanis approve of the US and Allied Forces serving in their young democracy. The poll did not make headlines in the West for some reason.

As far as the Taliban… 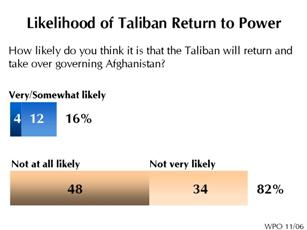 …82% of Afghanis say it is not very likely that they will regain power. (World Public Opinion)

KABUL, Dec 15 (Pajhwok Afghan News): Majority of Afghans support the government of President Hamid Karzai and the presence of US and NATO forces in Afghanistan, suggest a new poll for WorldPublicOpinion.org.

Ninety per cent countrymen rate President Karzai positively. However, the poll finds the support was on the decline because majority of Afghans are frustrated with the slow pace of the ongoing reconstruction process.

Afghans also do not like the Taliban to stage a come back. Taliban remain overwhelmingly unpopular and few Afghans believe the religious militants are likely to regain power, despite the surge in their attacks on NATO forces in recent months, suggest the poll.

Regarding the presence of foreign troops in the country and their peacekeeping/counter-insurgency operations and reconstruction activities, most people believe they are doing well.

Seventy-five per cent have a favourable view of US forces and 77 per cent describe NATO forces as effective, says the survey. With the exception of a little number of residents of this central capital, majority of Afghans in the provinces can not differentiate between NATO and coalition/US forces and their job.