On his trip to India today, Jordan’s King Abdullah II called on the silent majority of moderate Muslims to stand up and fight the extremists! 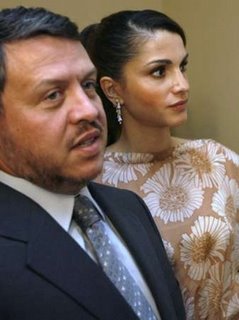 Jordan’s King Abdullah II has said it was time for moderate Muslims all over the world to stand up and fight the extremists within the community, an Indian newspaper reported Friday.

“Let the silent majority win the street back,” the Jordanian monarch said in an exclusive interview to the English-language Hindustan Times daily.

Abdullah told the paper that Islam had been “hijacked” by a minority of extremists who had imposed their agenda, based on miscommunication of Islam’s tenets, on the Muslim community.

Across Asia, Muslims who did not speak Arabic were often misled into believing that the Koran said something which it did not. “The only solution is education and dissemination of information,” he told the daily.

Abdullah accompanied by Queen Rania arrived in the Indian capital New Delhi on Thursday for a three-day visit.

It’s not the first time the King has spoken out against radical Islam. No wonder he is a marked man by Al Qaeda.

** Al Zarqawi was responsible for the slaughter of hundreds of innocents. His largest planned chemical attack in Jordan however, that would have killed up to 80,000 people was foiled by Jordanian authorities when the terrorists were caught crossing into Jordan from Syria with trucks loaded with chemicals for the attack… 80,000 people!