Before rushing off to canoodle with President Bashar Assad in Syria, Senators John Kerry and Chris Dodd had time to rub elbows with the anti-American Lebanese Parliament Speaker and Hezbollah ally Nabih Berri today in Beirut. 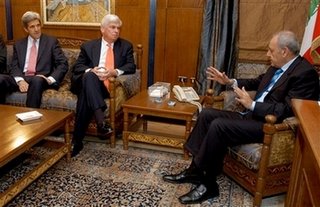 Lebanese Parliament Speaker Nabih Berri, right, speaks with U.S. Senators John Kerry, left, and Christopher Dodd, center, in his house in Beirut, Lebanon Monday, Dec. 18, 2006. Kerry and Dodd discussed the Lebanese crisis with Berri, a Hezbollah ally, where no details of their talks were disclosed and the two senators did not speak to reporters after the meeting. (AP Photo/Hassan Ibrahim)

According to I-cias: “Berri has for more than 20 years been one of the strongest leader of the Shi’is in Lebanon. Actually, however,he has been little more than a puppet for the rulers in Damascus.”