** Jimmy Carter and His Magic Atlas **

As you recall on Friday it was reported that Jimmy Carter lifted material from a Dennis Ross book and inserted into his new Jew-bashing book, Palestine: Peace Not Apartheid

While the LAT wasn’t able to get a hold of Ross last night, luckily FOX News was able to get him this morning. And in what seems to be an open and shut case of plagiarism, Ross explains that the maps in Carter’s book were specifically created for his book “The Missing Peace”–and Ross created them himself.

Here are the maps in question posted next to each other: 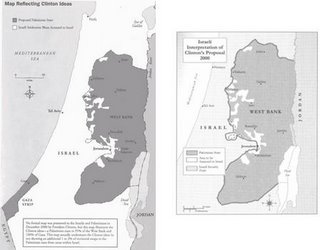 The Ross map is on the left and the Carter map (on page 148 P:PNA) is on the right. (Via Media Blog and Jewish Virtual Library)

Jimmy Carter had this to say about Ross maps on CNN’s Situation Room on Friday:

JIMMY CARTER, FORMER PRESIDENT OF THE UNITED STATES: Israel has penetrated and occupied, confiscated and colonized major portions of the territory belonging to the Palestinians.

TODD: As for the inaccuracies Stein alleges are in the book, most deal with dates or events. Carter says he fact checked the book with a prominent Middle East journalist and an Emory University history professor who also works at the Carter Center. But Stein also suggests Carter took material without attribution.

TODD: But Stein is clear, he is not accusing Jimmy Carter of plagiarism. As for the former president?

CARTER: My maps came from an Atlas that’s publicly available.

But, as A. Jacksonian points out, just because Jimmy says the maps came from a “publically available atlas”, it does not excuse him for not citing his source!

This statement by Carter contradicts with what Dennis Roth said in his interview at FOX News about the maps he created:

“I think there should be a correction and an attribution,” Ross said. “These were maps that never existed, I created them.”

After Ross saw the maps in Carter’s book, he told his publisher he wanted a correction.

When asked if the former president ripped him off, Ross replied: “it sure looks that way.”

The Political Pitbull has the FOX News video.

The next question for Carter obviously is “Which publically available Atlas?”

It’s doubtful he will be able to produce one…
Is this Jimmy’s “Lucy Ramirez” moment? It looks that way.