150 Iraqi families came together in Baghdad on Sunday. They all were victims of violence. They were protesting against the bloodshed. 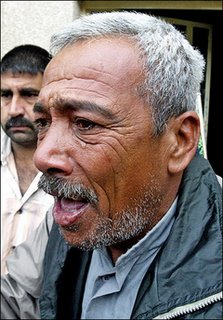 An Iraqi man breaks into tears during a protest organized by more than 150 sectarian violence victim families in Baghdad. (AFP)

And, while the Iraqis are marching on the streets of Baghdad, Iraqi leaders are also meeting to discuss how to break the influence of extremist groups including Moktada al-Sadr’s Mahdi Army:

Following discussions with the Bush administration, several of Iraq’s major political parties are in talks to form a coalition whose aim is to break the powerful influence of the radical Shiite cleric Moktada al-Sadr within the government, senior Iraqi officials say.

The talks are taking place among the two main Kurdish groups, the most influential Sunni Arab party and an Iranian-backed Shiite party that has long sought to lead the government. They have invited Prime Minister Nuri Kamal al-Maliki to join them. But Mr. Maliki, a conservative Shiite who has close ties to Mr. Sadr, has held back for fear that the parties might be seeking to oust him, a Shiite legislator close to Mr. Maliki said.

Officials involved in the talks say their aim is not to undermine Mr. Maliki, but to isolate both Mr. Sadr and firebrand Sunni Arab politicians inside the government. Mr. Sadr controls a militia, the Mahdi Army, with an estimated 60,000 fighters that has rebelled twice against the American military and is accused of widening the sectarian war with reprisal killings of Sunni Arabs.

Mohammed at Iraq the Model has good news that may help unify the people. 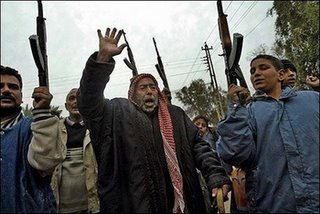 Iraqi demonstrators shout slogans during a protest organized by more than 150 secterian violence victim families in Baghdad. President Jalal Talabani, a long-time US ally, has made a stinging attack on the controversial Iraq Study Group report, calling it “dangerous” and insulting to Iraqi sovereignty.(AFP/Wisam Sami) 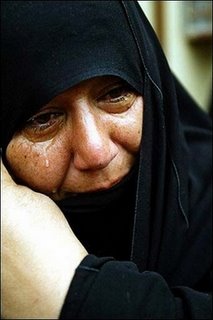 An Iraqi woman breaks into tears during a protest organized by more than 150 secterian violence victim families in Baghdad. (AFP)