Iraq exposed democracy to the Middle East this weekend.

Iraq just happened to be the only Muslim nation out of 16 that entered into the women’s volleyball competition at the Asian Games in Doha, Qatar.
…Proof that democracy has perks! 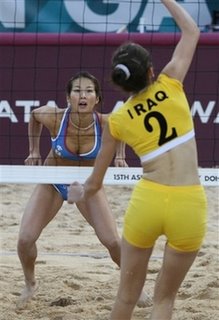 Japan’s Satoko Urata, left, stands by as Iraq’s Lida Agasi spikes the ball during the 15th Asian Games beach volleyball competition in Doha Saturday, Dec. 2, 2006. Beach volleyball’s penchant for bikinis has touched off a bit of a cultural clash in this conservative Muslim city, which by hosting the Asian Games, is trying to bolster its bid to bring the 2016 Summer Olympics to the Middle East. Though 16 Muslim nations are represented at the Asian Games, only one, Iraq, is competing in women’s beach volleyball. And its team, sisters Lisa and Lida Agasi, are Christians. (AP Photo/Han Guan Ng)

The temptation was just too great and the flesh was weak in Doha.
…The stands were packed. 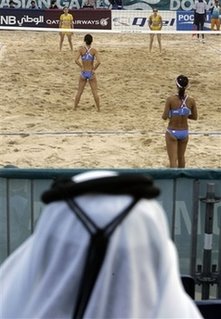 A Qatari man watches beach volleyball played between Japan and Iraq during the 15th Asian Games compettion in Doha Saturday, Dec. 2, 2006. Beach volleyball’s penchant for bikinis has touched off a bit of a cultural clash in this conservative Muslim city. (AP)

For some reason the Qatari women passed on the competition… 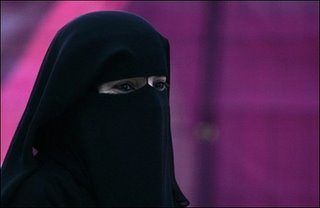 A Qatari woman wearing a traditional veil arrives for the opening ceremony of the 15th Asian Games in Doha. (AFP)