The Afghanis were not pleased that Ahmadinejad was interfering with their affairs!

Mahmoud thinks that Afghanistan would be better off with the Taliban.
75% of Afghanis disagree.

Reuters has Tea with the Taliban. 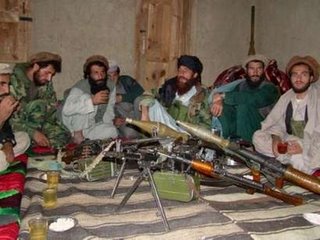 Hundreds of people in the western Farah province on Saturday staged a protest demonstration against the remarks of Iranian President Mahmood Ahmadinejad and Pakistan’s Foreign Minister Khurshid Mehmood Kasuri and termed it interference in the internal affairs of Afghanistan.

Addressing the protestors, acting governor and police chief of the province Brig Gen Sayed Aqa Saqib said they had condemned the statements because it was tantamount to interference in their country.

Saqib said the Iranian president should focus on his own country. Regarding the remarks by the Pakistani FM, he said Afghanistan would never accept any country as its master.

Haji Abdul Basir, head of the Farah provincial council, in his speech, said Afghans had fought wars against the British colonialists and the then USSR and saved Pakistan, but the latter now wanted to impose its clout here. He said Afghans would never allow strangers as their rulers. 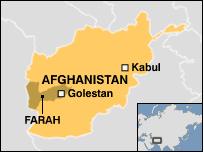 In his meeting with NATO leaders, Pakistani FM Khurshid Kasuri was quoted as saying that NATO should admit their defeat and start negotiations with Taliban to form an interim government minus President Hamid Karzai.

The remarks were later contradicted by Pakistan’s foreign office and said Kasuri had not given any such statement. In a knee-jerk reaction, Foreign Minster Dr Rangin Dadfar Spanta termed Kasuri’s remarks as interference in his country’s internal affairs.

In a recent poll… “Almost nine in 10 call the invasion a good thing for their country. Three-fourths have a favorable opinion of the United States and almost nine in 10 prefer the current government to the Taliban.”