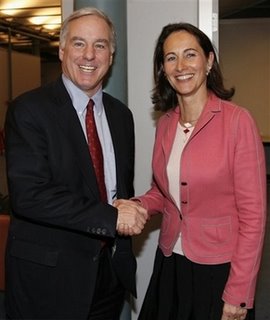 After outing several gay Republicans this last election cycle…
American democrats finally came out of their own socialist closet this week!

Democratic chairman Howard Dean met with European Socialists today at their annual summit and pledged better relations with the socialists:

Socialist leaders attending a meeting of the European Socialist Party pledged that with the Democrats on the rise, strong ties could be renewed with the United States after years of cool relations with Republican President George W. Bush.

Howard Dean, chairman of the national committee of the U.S. Democratic Party, is attending the two-day conference together with the leaders of leftist governments of several countries and party leaders from across Europe.

“We are not anti-American, we want the real America, your America,” former Danish Prime Minister Poul Nyrup Rasmussen, president of the European Socialist Party, said in remarks directed at Dean.

Sergolene Royal showed her disgust for America and Israel this week in Lebanon:

It was peculiar that the French ambassador, at Royal’s side during the visit, had said nothing of Ali Ammar’s comments comparing Israel with the Nazi régime. Ségolène Royal’s visit to Lebanon had started on the wrong foot, and the French right-wing parties have been having a field day.

Royal continued: “There are many things that we have in common, for example, your analysis on the role of the United States”. Ali Ammar had accused the American administration of “unlimited madness”. 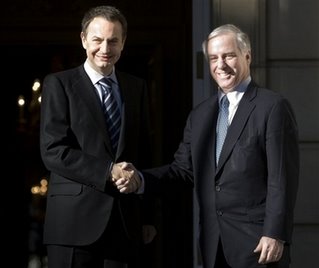 Appeasing socialist Zapatero, would not stand, nod, or even look at the American flag in a recent military parade.

Democrats may think they’ve successfully hidden their socialism from America, but when the American Communist Party started campaigning for them, it sort of leaked out.