Maybe the US can discuss this incident with Iran when they meet for discussions over the future of Iraq and America’s role in the Middle East.

The Telegraph put together a 2 minute video HERE explaining the charges against Cpl. Daniel James.

Gen David Richards, the commander of Nato forces in Afghanistan and one of the most senior officers in the Army, controls over 31,000 troops. 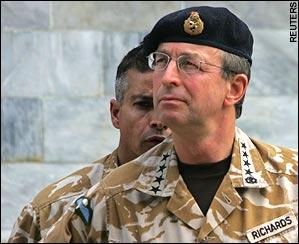 Te Telegraph is reporting that a British man with Iranian roots was charged with spying for Iran yesterday in London court:

A military aide to the commander of British forces in Afghanistan appeared in court yesterday accused of spying.

Cpl Daniel James, 44, is charged under the 1911 Official Secrets Act with “prejudicing the safety of the state” by passing information “calculated to be directly or indirectly useful to the enemy”.

It was said he had communicated with a “foreign power” in the incident on Nov 2, believed to be Iran.

Most of the hearing at Westminster magistrates’ court yesterday was held in secret and no mention was made of James’s job or his address.

But The Daily Telegraph has learned that he acts as an interpreter for Gen David Richards, the commander of Nato forces in Afghanistan and one of the most senior officers in the Army.

The proceedings were not open to the public out of concern that the evidence presented may jeopardize national security.

The Scotsman is reporting that he was passing information to Al Qaida.