So much for peaceful protests.
Stores and businesses were torched during rioting in Beirut on Sunday.
One 20 year-old Hezbollah member was killed during clashes between Shia and Sunni Muslims. 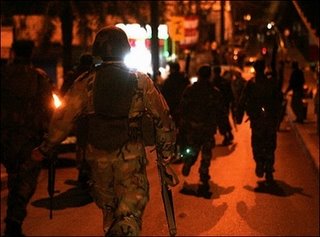 Lebanese army soldiers chase rioters in Beirut. Lebanon’s political rift deepened on the third day of a protest led by the Shiite militant group Hezbollah and Christian opposition supporters, with the Western-backed government vowing to resist calls to resign.(AFP/Joseph Barrak)

Abu Kais at From Beirut to the Beltway has a frightening news from Lebanon:

You will recall the Syrian who was arrested yesterday, the three today, and Hizbullah’s refusal to end their blockade. And as if on cue, Suleiman Franjieh, Wiam Wahab and Talal Arslan launched despicable attacks on the government and March 14 today. The strange report about Fatah Islam I blogged about a few days ago about also makes great sense in light of the above information. You will also recall how Syrian agents were planning to accompany Hizbullah during its planned storming of the Serail on Friday, which was discovered and foiled after the intervention of the Saudi King.

According to al-Seyassah in its December 3 issue, Hizbullah will next move to occupy the Beirut airport by erecting tents on the runways to further isolate the government and stop the visits by European and Arab ministers showing their support. (Notice how Aoun yesterday lashed out at Saudi Arabia, Egypt, the US, France and all countries for supporting Siniora. Also, how can we forget the time Aoun told Siniora that there he will not have time to pack his bags when his day to resign comes, or when the general threatened to burn down the Serail).

Furthermore, the report claims that Nasrallah has issued an order to Shia officers in the internal security forces to resign their posts and join “the opposition”. The Lebanese internal security forces are currently the only forces entrusted with and trusted to protect the Lebanese cabinet. The Lebanese army’s loyalties are at best unknown, though it is unclear whether they would support a Hizbullah coup of the scale described by al-Seyassah. Incidentally, in an address at martyrs’ square today, Franjieh praised the Lebanese army, claiming it was “on our side”. 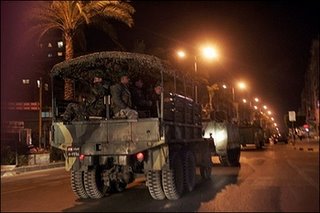 Lebanese army soldiers deploy in Beirut. Lebanon’s political rift deepened on the third day of a protest led by the Shiite militant group Hezbollah and Christian opposition supporters, with the Western-backed government vowing to resist calls to resign.(AFP/Joseph Barrak)

Germany called on foreign powers Saturday to stay out of Lebanese affairs amid a mass protest led by opposition forces aimed at bringing down the Siniora government.

However, French Socialist presidential candidate Segolene Royal sided with Hezbollah, saying US foreign policy smacked of insanity while “comparing Israel’s behaviour towards Lebanon — which Israel bombarded over July and August in its 34-day war with Hezbollah — with “Nazism”.