Hezbollah and its supporters held a mass rally in Beirut today in their continued attempt to bring down the democratically elected Lebanese government. 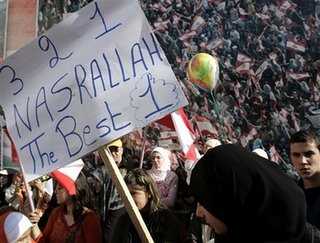 The American Left blame the US, of course, for the popularity of Hezbollah!
Tom Lasseter from McClatchy Newspapers reports:

Many in Beirut say U.S. failure to stop Israel’s onslaught against Hezbollah last summer crippled the Lebanese government — a U.S. ally — while strengthening Hezbollah — a U.S. enemy. That created an environment in which the Shiite Muslim militia could call for overthrowing Sunni Muslim Prime Minister Fuad Saniora and his Cabinet.

Sunni spiritual leaders say that toppling the Siniora government is a “red line” and will never happen.

Lebanon’s President Emile Lahoud, a staunch Syrian supporter, refused to endorse a resolution sent to him by the sitting Cabinet seeking to create a tribunal to try suspects in the killing of the former prime minister Hariri. 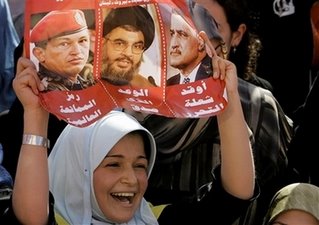 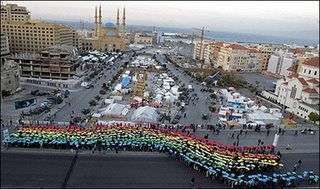 Anti-government protesters carry the colors of the opposition movements as they march near their camps outside the Serail in downtown Beirut, December 09. Lebanon’s opposition, led by the Shiite militant group Hezbollah, is set to stage a mass rally in Beirut in a showdown to force a change in the Western-backed government.(AFP/Anwar Amro)