Ahmed Ali Mahmoud, the young Hezbollah and Amal supporter who was shot in the back as his Shiite gang infiltrated a Sunni neighborhood in Beirut on Sunday night, was buried today.

Mahmoud was killed in clashes between Hezbollah supporters and Lebanese Sunnis after Hezbollah thugs infiltrated the Sunni neighborhood on Sunday. The Hezbollah (Amal) members carried stones, sticks and knives with them for fight that lasted about 45 minutes.

It is still not clear who pulled the trigger… But Mahmoud died from a bullet wound to the back! 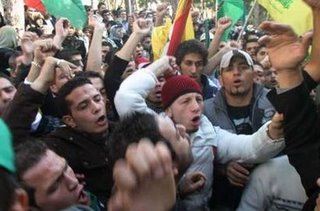 Lebanon’s Muslim Shi’ite Amal movement members chant slogans as the coffin of Ahmad Mahmoud is carried through a street in the suburbs of Beirut December 5, 2006. Mahmoud was killed on Sunday during clashes between Sunni residents and Shi’ite protesters in the Qasqas neighbourhood in Beirut. (REUTERS/ Khalil Hassan)

Waving clinched fists and flags of the Shiite Hizbullah and Amal movement, the mourners carried Ahmed Mahmoud’s coffin to the “Two Martyrs” cemetery in Beirut’s Shiite southern suburb where he was buried two days after his tragic death by gunfire from a mysterious source, according to police.

Hizbullah accused three persons from the predominantly Sunni Mustaqbal movement of shooting Mahmoud, 20, in a clash on Sunday.

The Mustaqbal movement, however, denied the charge. 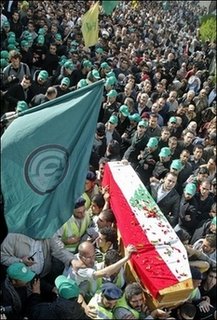 Mourners carry the coffin of Lebanese anti-government supporter Ahmed Mahmud, 20, during his funeral in Beirut. (AFP)

The Lebanese Army broke up another Sunni-Shiite fight on Tuesday after Hezbollah infiltrated and damaged property in the Beirut Sunni neighborhood.
Naharnet reported:

About 300 angry protestors also blocked the Beirut airport highway after midnight, but the Lebanese army intervened and opened the road.

Fighting broke out in several predominantly Sunni neighborhoods after nightfall Monday as the body of Ahmed Mahmoud, who was killed in a similar street fight, was brought by ambulance to downtown Beirut, where thousands of Hizbullah-led protestors were camping for the fourth straight night demanding to overthrow Saniora’s government…

Soldiers already deployed in Beirut went into action after riot police were overwhelmed by protestors who invaded one of the Sunni neighborhoods in vehicles, prompting residents to retaliate, witnesses and a reporter working for Agence France Presse said.

Calm was restored after an hour of unrest, which followed a day of tension after 20-year-old Mahmoud, a Shiite, was killed.

A police statement issued after midnight said a group of about 60 anti-government protestors made their way into Qasqas and Mazraa through a side road opposite to where the army vehicles were deployed, smashing the windows of three parked cars and several stores with stones and sticks.

It said two people were wounded when protestors broke into “the house of one of the citizens,” before security forces intervened and dispersed them.

The police statement accused the protestors of penetrating Qasqas and Mazraa neighborhoods “not to express their views … but to harass the people and passer-bys, provoke them, damage their properties and stage riots.”

It urged “those overseeing the protestors to guide them towards the right course so as to avoid being arrested and referred to the judiciary.” 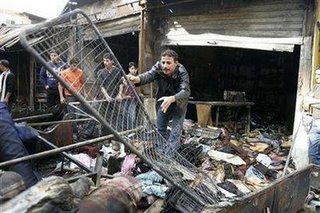 A man inspects the damages to shops burnt during clashes between Sunni residents and Shi’ite protesters in the Qasqas neighbourhood in Beirut, December 4, 2006. (REUTERS/Mohamed Azakir)

Abu Kais at Michael J. Totten’s blog has a terrific essay on “When death becomes a way of life”.