Hezbollah displays the coffin of its martyr, Ahmed Ali Mahmoud, in the center of its “tent city” near the government buidings in downtown Beirut.

Mahmoud was killed in clashes between Hezbollah and Lebanese Sunnis after Hezbollah infiltrated the Sunni neighborhood on Sunday. The Hezbollah members carried stones, sticks and knives with them for fight that lasted about 45 minutes.

It is still not clear who pulled the trigger… But Mahmoud died from a bullet wound to the back!
-Just like last time.

(Earlier I predicted that Hezbollah now has its martyr.) This evening Hezbollah’s Al-Manar television started calling called Mahmoud “The martyr of national unity.” 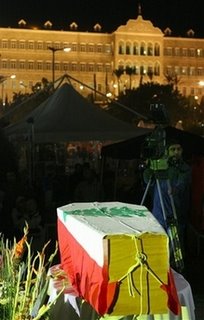 The coffin of Ahmed Ali Mahmoud who was killed Sunday when clashes erupted between groups of Shiites and Sunnis, is seen placed on a platform in the middle of anti-government protesters, in front the Lebanese Government House, seen in the background in downtown Beirut, Lebanon, Monday Dec. 4, 2006. Violent clashes broke out between Shiite and Sunni Muslims in the capital, leaving one man dead from gunshot wounds and 21 others injured at a time when tensions throughout Lebanon threaten the country’s fragile sectarian and political balance. (AP Photo)

Renewed clashes erupted in Beirut late Monday after the body of an opposition supporter slain a day earlier was carried through the heart of the capital by his comrades.

Witnesses said opposition demonstrators in Downtown Beirut – enraged at the site of one of their own being carried in a coffin through the crowds – ran toward mostly Sunni Tariq al-Jaddidah carrying sticks.

A security source at the scene told The Daily Star that the demonstrators, mostly Shiite members of the Amal Movement to which the late Ahmed Ali Mahmoud, 20, belonged, began wrecking cars and shops in the neighborhood.

Many residents, most of whom support late Premier Rafik Hariri and his son Saad, descended from their homes to fight with the demonstrators.

As The Daily Star went to press, the security source said Internal Security Forces troopers had come between the two groups. He could not confirm any deaths or injuries.

Again… Not your typical tent city. 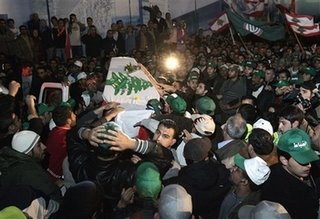 The coffin of Ahmed Ali Mahmoud who was killed Sunday when clashes erupted between groups of Shiites and Sunnis, wrapped by the Lebanese flag, is carried by anti-government protesters, in front the Lebanese Government House, in downtown Beirut, Lebanon, Monday Dec. 4, 2006. (AP)

The Shiite Chief urged the victim’s family to avoid revenge, yet paraded his body through the streets of Beirut!

Ya Libnan has this:

The body of Ahmed Mahmoud, a 20-year-old Shiite, was brought by ambulance Monday night to downtown Riad Solh Square, where thousands of pro-Hezbollah protesters were camping for the fourth straight night demanding the ouster of Siniora’s government.

The protesters cheered, blared nationalist songs and waved the Lebanese flag as the coffin was placed on a platform in front of the crowd, just a few hundred yards from Siniora’s offices, which were ringed by troops.