Senator Harry Reid came clean today.
No, not about his Vegas real estate ventures… about Iraq.

After saying that he supported increasing troops in Iraq on Sunday:

The Senate’s top Democrat, Harry Reid, offered qualified support Sunday for a plan to increase U.S. troops in Iraq, saying it would be acceptable as part of a broader strategy to bring combat forces home by 2008.

By Tuesday night Harry has changed his mind and is now calling for complete withdrawal- The Levin-Reed Cut and Run Plan
And, he announces the democrat’s plan on none other than the loony Huffington Post… 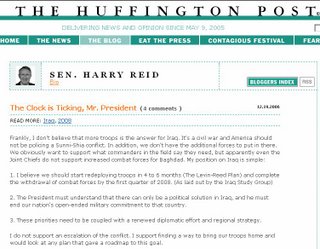 Here is the text from Harry’s disgraceful letter at The Huffington Post:

Frankly, I don’t believe that more troops is the answer for Iraq. It’s a civil war and America should not be policing a Sunni-Shia conflict. In addition, we don’t have the additional forces to put in there. We obviously want to support what commanders in the field say they need, but apparently even the Joint Chiefs do not support increased combat forces for Baghdad. My position on Iraq is simple:

1. I believe we should start redeploying troops in 4 to 6 months (The Levin-Reed Plan) and complete the withdrawal of combat forces by the first quarter of 2008. (As laid out by the Iraq Study Group)

2. The President must understand that there can only be a political solution in Iraq, and he must end our nation’s open-ended military commitment to that country.

3. These priorities need to be coupled with a renewed diplomatic effort and regional strategy.

I do not support an escalation of the conflict. I support finding a way to bring our troops home and would look at any plan that gave a roadmap to this goal.

It’s been two weeks since the Iraq Study Group released its plan to change the course and bring our troops home. Since then, the President has been on a fact finding tour of his own administration — apparently ignoring the facts presented by those in the military who know best. The President needs to put forth a plan as soon as possible, one that reflects the reality on the ground in Iraq and that withdraws our troops from the middle of this deadly civil war.

Wow! That is a mouth full, Harry. I’m not sure if you are suggesting that Sandra Day O’Connor and the other ISG members are the military experts the president should listen to in that last paragraph, or not? Because the military came out shortly after the ISG Report was released and denounced it.

And, it’s nice to see that Harry has joined with NBC with designating Iraq a Civil War. We would expect nothing less.
Thank you notorious AP stringer Jamail/Jamil Hussein for your crap reports and thank you NBC for listening!

I guess we can all see where this new year is heading!

Is it just coincidence that Harry would publish the democrat’s Cut & Run plan on the same day that the new Defense Secretary Gates said that “Failure in Iraq Will Haunt US”?

Dan Riehl has more on the back stab.
Wilsonizer suggests a study that would enable the US to achieve its stated goals.