Tusday was the funeral of Ahmed Ali Mahmoud, the young Hezbollah and Amal supporter who was shot in the back as his Shiite gang infiltrated a Sunni neighborhood in Beirut on Sunday night. 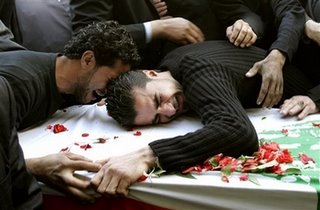 The two brothers of Ahmed Ali Mahmoud who was killed during clashes which erupted between groups of Shiites and Sunnis, mourn on his coffin draped in the Lebanese flag, in the southern suburb of Beirut, Lebanon, Tuesday Dec. 5, 2006. (AP Photo/Hussein Malla) 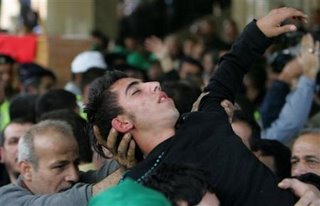 The brother of Ahmed Ali Mahmoud who was killed Sunday during clashes which erupted between groups of Shiites and Sunnis, is carried by relatives after he fainted, during his brother’s funeral procession, in the southern suburb of Beirut, Lebanon, Tuesday Dec. 5, 2006 (Yahoo)

But… Is this really one of the brothers? 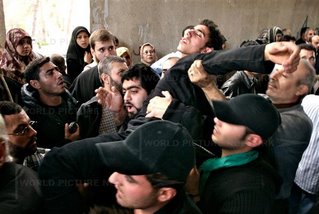 Thousands came out to mourn the recent death of Ahmed Mahmud in Beirut, Lebanon on Tuesday, Dec. 5, 2006. Mahmud was part of the Amal movement which along with Hezbollah has been staging anti-government protests in downtown Beirut for the last five days. Ahmed Mahmud was recently killed during a street clash between opposition and government supporters in the Kaskas neighborhood of central Beirut. (Paul Taggert- WPN)

(There is another picture of this man at World Picture News so maybe he is family.)

But, with all of the cameramen in the background, it makes you wonder if this photo session was staged?… Nah, Hezbollah would never do that. 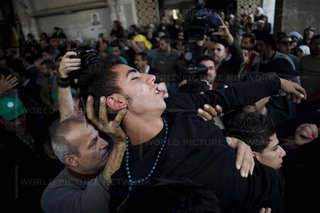 A young man, overcome by grief, is carried through the crowd at the funeral of slain Haraket Amel member Ahmad Mahmoud, Tuesday in the Chiyeh district in Beirut, Lebanon on Tuesday, Dec. 5, 2006. Thousands of Lebanese processed and mourned the death of Ahmad Mahmoud, a young member of the Shi’ite Haraket Amel movement who was killed by unknown gunmen in the Qasqas Sunni district of Beirut Sunday night. Mourners shouted anti-Israeli and anti-Siniora government chants as they walked with the body to a cemetary in the Chiyeh district of Beirut. (Bryan Denton- WPN)