** BBC VIDEO HERE of the attack on Haniya’s convoy!

Prime Minister’s Haniya’s son is shot in the face!! 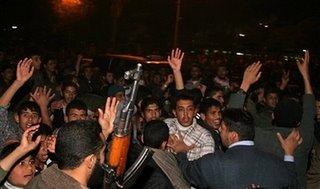 Hamas supporters storm the Rafah border crossing between the Gaza Strip and Egypt after a gunbattle erupted at the terminal, Thursday, Dec. 14, 2006. Hamas gunmen seized control of the Gaza Strip’s only border crossing Thursday in a ferocious gunbattle with Fatah-allied border guards that raged into the night, deepening factional violence that has pushed the area closer to civil war. (AP Photo/Maanimages, Hatem Omar)

The BBC reports that it was an attempt on the life of Hamas Prime Minister Haniya:

Hamas says the shooting on the convoy of the Palestinian prime minister at a Gaza border post was an assassination attempt by a rival faction. Ismail Haniya’s convoy came under fire when it was allowed to cross, after being held there for several hours.

A bodyguard was killed and Mr Haniya’s son was shot in the face as the fire fight erupted at the Rafah checkpoint.

His convoy came under fire after the crossing was closed by Israel and angered Hamas militants, waiting to welcome him on the Gaza side, stormed the crossing point, overwhelming the border guards.

The incident, of the jeep Mr Haniya was travelling in manoeuvred to avoid the bullets, was captured on television cameras. 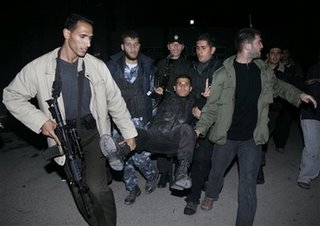 Palestinian gunmen from Hamas carry an injured colleague during a gunbattle with security forces at the Rafah border Crossing next to the border with Egypt,Thursday, Dec. 14, 2006. (AP)

On Friday Hamas blamed a Fatah strongman in Gaza for the attempt on Haniya’s life:

Angry Hamas officials on Friday blamed a powerful Gaza strongman and senior Fatah official for a shooting attack on Ismail Haniyeh’s entourage that killed one of the prime minister’s bodyguards and wounded his son.

The current Fatah-Hamas violence is spreading to the Palestinian refugee camps in Lebanon. 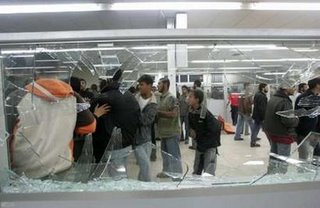 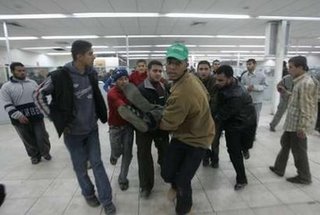 A wounded Palestinian is carried away in the Rafah border terminal after Israel ordered it shut, south of Gaza strip December 14, 2006. (Reuters)