Cindy Sheehan, Medea Benjamin and two other activists from the communist group Global Exchange were convicted of trespassing for blocking the doors of the UN building back in March. 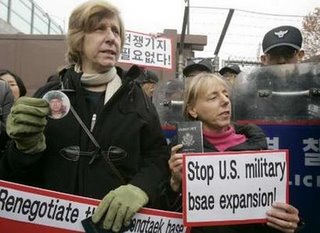 Police block anti-war activists Cindy Sheehan (L) and Medea Benjamin, the founding director of global exchange, as they try to enter the headquarters of the U.S Forces Korea (USFK) to meet the USFK’s head in Seoul November 21, 2006. A delegation of U.S. peace and social justice activists led by Sheehan and Benjamin arrived in Seoul on Sunday (11-19) for a six-day visit to object the expansion of Camp Humphrey, the U.S. military base in Pyongtaek, and to protest against a plan for a free trade agreement (FTA) between South Korea and the U.S.. REUTERS/Lee Jae-Won)

Cindy Sheehan and 3 other women were convicted in New York today:

Peace activist Cindy Sheehan and three other women were convicted of trespassing Monday for trying to delivery an anti-Iraq war petition to the U.S. Mission to the United Nations.

A Manhattan Criminal Court judge sentenced them immediately to conditional discharge, which means they could face some form of penalty if they are arrested in the next six months, and ordered them to pay $95 in court surcharges.

Sheehan and about 100 other members of a group called Global Exchange were rebuffed last March when they attempted to take a petition with some 72,000 signatures to the U.S. Mission’s headquarters across a street from the United Nations.

The four were acquitted of disorderly conduct, resisting arrest and obstructing government administration. They had faced up to a year in jail if convicted of all counts.

Six months without being arrested may be quite a stretch for Cindy and Medea… That’s a stretch!