Ahmadinejad threatens to wipe out Israel at a Holocaust Convention of all places!

Clearly this is a deranged and dangerous man.
This photo here is just mind-boggling… 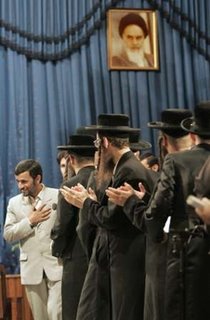 Iran’s President Mahmoud Ahmadinejad (L) welcomes Jewish participants at a Holocaust conference in Tehran December 12, 2006.The conference, which drew widespread condemnation for questioning the killing of 6 million Jews by the Nazis during World War Two, agreed on Tuesday to form an international committee to study the Holocaust. (REUTERS/Raheb Homavandi)

It was fitting that his threats today came as he spoke to the Holocaust Assembly in Tehran.
Iranian News Service reported:

President Mahmoud Ahmadinejad here Tuesday said that thanks God the curve of Zionist regime’s life is on the decline adding that this is a divine promise and will of world nations.

Addressing the International Conference on ‘World Vision on Holocaust’ in Tehran, the president said that today nations are seeking justice and worship God Almighty.

“Those having supported the Zionist regime during their lifetime, should be aware that its lifetime will be over and their interests as well as reputation will be endangered.

“Just as the ground was prepared to assign such a regime, the Zionist regime will be overthrown by its supporters,” he added.

Underlining that such a measure by West will be to the benefit of world peace, he hoped that proponents of the Zionist regime will respond positively to this human call.

But, Mahmoud wasn’t through…
Later today he added that there may be prosecutions in the future based on findings from the Holocaust researchers.
Again, from Iranian News:

Stating that establishment of the Zionist regime and using the Holocaust as propaganda aim at dominating the region, he added, “As the Soviet Union disappeared, the Zionist regime will also vanish and humanity will be liberated”.

The president reiterated that certain European and US politicians could no longer term atrocities of the Zionist regime “self-defence” and the resistance of Palestinians against occupying invaders as terrorists.

Supporting establishment of a fact-finding mission on Holocaust as proposed by the Tehran conference, he urged the western coutries to pledge that they will not disturb members of the team, “so that further surveys are carried out, issues are clarified, and criminals are sentenced”.

“Based on the facts gained by the team, if Holocaust’s truth is ruled out, root causes of problems and crimes in the Middle East region will be terminated.”
He also said that results of the mission’s study will put an end to the 60-year-old dispute on the issue of Holocaust and its scale.

“Sixty years after the World War Two, why are we still witnessing aftermath of this war?” Ahmadinejad questioned.

Mahmoud got a standing ovation from the gathering of Anti-Semites after his speech.

More lunacy… David Duke claimed that gas chambers were not used on the Jews during the Holocaust in his speech.

Atlas shares concerns about the mad mullahs in Iran.