The Left is planning a lovely Valentines Day March to Mecca.

And, I am with Glenn Reynolds on this one.
After nearly 4,000 executions of gays in Iran alone, it is about time that the Left recognized the real threat of radical Islam.

But…
Do they really think the Kingdom of Saudi Arabia is ready for this? 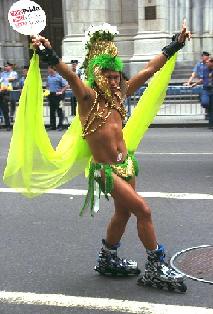 After all, Saudia Arabia is where more than 100 men were sentenced to imprisonment and flogging in 2005 after being arrested in for “dancing and behaving like women”.

But, Greg Gutfeld at the Huffington Post reported on this March in February earlier today and says it’s a go:

IN THE NAME FREEDOM AND TOLERANCE, AND IN HARMONY WITH OUR GAY MUSLIM BROTHERS AND SISTERS, WE PROUDLY ANNOUNCE THE FIRST MARCH TO MECCA, FEBRUARY 14, 2007

Human Rights Watch, Moveon.org, ACT-UP, the Huffington Post and David Geffen are proud to present the March to Mecca, a celebration of peace that calls all gay brothers, sisters and people undergoing sex-reassignment to march to the holiest of holy cities, Mecca, the capital city of Saudi Arabia’s Makkah province on Valentine’s Day, February 14, 2007.

Although there is a big bash planned by Rep Barney Frank of the U.S. House of Representatives- a special VIP rave on the Queen Boat, a floating disco on the Nile… Do these people really think they will be up for that (if they make it to Mecca alive) after marching 45 miles in the Saudi sun?

Mecca is 45 miles inland from Jeddah.
The average walking speed is 4.95 feet per second for a young adult.
That comes out to somewhere around 13 hours of constant walking- If they make it there alive!
And, although the weather may only be in the low 80’s in February in Jeddah, 45 miles is still a long walk in the desert in a conservative Islamic Kingdom on the road to one of Islam’s holiest shrines!

Update: Spoof- If it were just a disco yacht party the story might have held up.