300,000 Still Without Power After Worst St. Louis Ice Storm Ever

THe National Guard has been called in to check on those without power,
KSDK VIDEO HERE.

** 317,000 are still without power in the St. Louis region after the worst ice storm ever recorded hit the area on Thusday night. 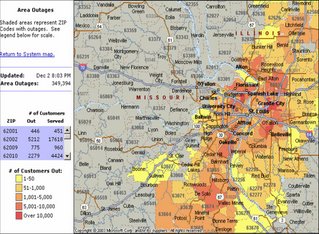 The Ameren UE power outage map shows that much of the St. Louis region is still without electricity.
Here is the power outage listing by zip code.
Temperatures around 35 degrees melted much of the ice on Saturday.
The Post Dispatch reported:

At its peak, Ameren counted about 510,000 customers without power in Missouri and Illinois in the wake of Thursday’s icy storms that toppled trees and knocked down power lines.

By Saturday morning, Ameren had restored some 60,000 — but another 10,000 customers lost power throughout the day. By nightfall, that tally of outages hovered about 450,000.

A canopy at a gas station in Ballwin collapsed under the weight of ice Saturday afternoon. Several people were trapped in cars, but only one minor injury was reported.

The outages represented about one-fifth of Ameren’s 2.4 million customers. 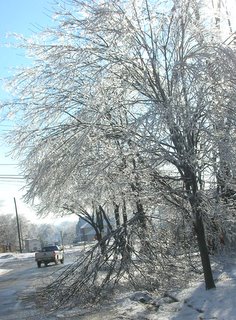 Click on Photos to see all of the ice

Several roofs and awnings in the area collapsed under the weight of the ice and snow from the storm:

An aluminum canopy at a gas station in Ballwin collapsed Saturday afternoon under the weight of ice and snow.

The accident happened at the Conoco station at the intersection of Manchester and New Ballwin Roads. Eight people were beneath the canopy at the time. One person suffered minor injuries.

Dale tucker’s wife Brenda was among those was at the gas pumps. “She heard a noise kind of like a trash can falling and something just told her to run and she took off running.

“The young man who was standing outside the car saw her run and he took off running too and the thing collapsed right behind him. 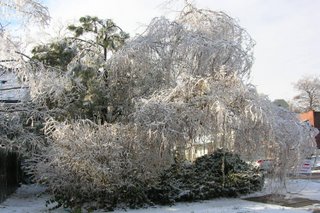 I find AmUE’s response amusing but sad. I remember much more severe storms in the StL area in the early 70s and later that decade. Personally, I see this as a significant but not crippling storm (a 2 on a 5 scale). What makes it crippling is our failures.

We are noted for our abilities to spend and prioritize unwisely. Our most important highways are those that deliver electricity, communications and net links to sites like yours. Instead of putting these assets out of harms way, we spend over $600 million for an inferior but new light rail system (which also was crippled) while
planning to spend over $500 million to repave an existing highway (which will further cripple commerce). No doubt that both objectives are potentially beneficial but other important issues remain inadequately addressed.

These important infrastructure issues are given lower priority in order to favor particular subsets in our region. It would also help if locals knew and cared how to properly maintain and trim their trees.

Prairie Pundit is waiting to see who gets blamed for this one.

Previously:
St. Louis Gets Slammed With Ice- 500,000 Without Power!