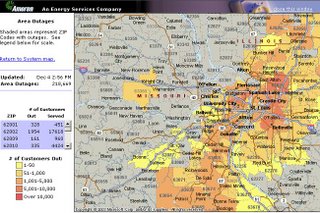 The Ameren UE power outage map shows that much of the St. Louis region is still without electricity.

The temperatures in St. Louis have held below the freezing mark.
354 members of the National Guard have knocked on over 4,000 doors since the storm hit on Thursday.

KSDK in St. Louis are reporting that 19 deaths are blamed on the storm that went through the region last Thursday:

(KSDK) – 19 people have died across the country in the aftermath of the storms, and hundreds of thousands of people in Missouri and Illinois were still without electricity Monday.

In the city of St. Louis, two brothers, 35 and 37 years old, died from carbon monoxide poisoning. They had been burning charcoal in their home to stay warm. 2 other deaths have been linked to the cold in the city.

Area officials are trying to tell people not to stick out the cold in their homes if they have no heat. They want people to go to the home of a friend or family, or to go to one of the shelters set up in the area. To see a list of shelters, click here.

National Guard officers have been going door-to-door, checking on those without electricity. They have also found dozens of vehicles abandoned along roadways.

KMOV is posting viewer’s photos from the storm HERE. 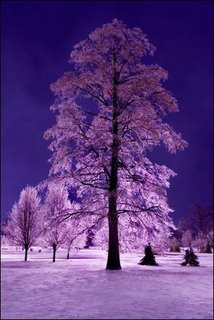 Icy night in Forest Park
“This was taken at 3 AM in Forest Park. I really liked the way the lights in the background shown through the ice covered brances of the tree giving it an almost crystalline appearance.” Jack Muhrline.

This was a typical sight in St. Louis this weekend… 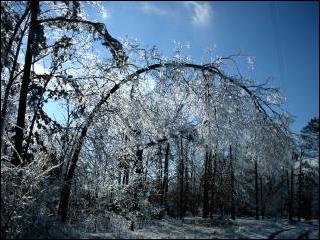 Bowing to the strength of mother nature
KMOV By Linda Kohler
This 50 foot tall tree normally stands straight but is bending under the weight of all the ice.
Location: Potosi, MO

Previously:
St. Louis Gets Slammed With Ice- 500,000 Without Power!
300,000 Still Without Power After Worst St. Louis Ice Storm Ever