The Blog of War
by Matthew Currier Burden 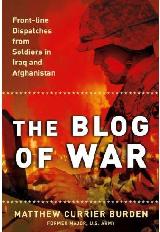 You can order this book now at Amazon.

The Blog of War It is written by milbogger “Matt” at Blackfive one of the best and most popular milbloggers.

“His blog began as an homage to a friend killed on duty in Iraq and quickly became a source of information about what was really happening in Afghanistan and Iraq.”

Obviously, Matt and Blackfive have come a long way.

Here is what is being said about the book from Publishers Weekly:

A torrent of Internet blogs has poured from U.S. forces overseas, providing a unique view of our wars. Retired officer and blogger Burden does not claim this collection of extracts represents a cross section of what’s available, nor does he disguise his biases. All the officers in the book are competent; all the enlisted men and women are brave; and all the husbands love their wives and vice versa.

In The Blog of War Matt presents selections from the best of the military blogs. 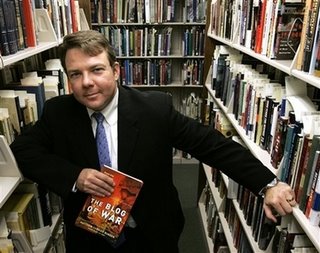 Author Matthew Currier Burden stands at the Pritzker Military Library with a copy of his book containing a collection of entries from bloggers who served in the war called , ‘The Blog Of War,’ in Chicago, Ill., Oct. 26, 2006. From the front lines of Iraq and Afghanistan to here at home, soldiers are blogging about military life are under the watchful eye of some of their own. Burden, 39, of Chicago said the Army has done a poor job portraying positive aspects of the war and telling the ‘stories that need to get told.’ (AP Photo/Charles Rex Arbogast)

This is the first real-time history of a war, a history written even as the war continues.
Cool… good for you, Matt!
And, happy Veterans Day!