What do you do when your backers start acting like Nazi storm troopers?…
You hire them and start publishing their nutty rants. 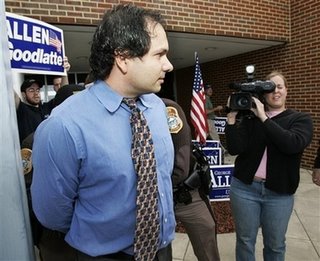 Mike Stark the crazed liberal blogger who was wrestled to the ground at a George Allen event earlier this week, was handcuffed at an Allen rally on Saturday.
Drudge reports:

A liberal blogger who was manhandled by supporters of Sen. George Allen earlier in the week was handcuffed by authorities and escorted from another rally Saturday after an Allen backer claimed the man pushed him to the ground. Mike Stark told The Associated Press that sheriff’s deputies detained and released him. He was not charged.

“I’ll own this town,” Stark, a first-year University of Virginia law student, was overheard telling sheriff’s deputies as he was led away from the rally at the Shenandoah Valley Regional Airport.

Stark, 38, said he was attending the event as a reporter for the Air America Radio network’s “The Young Turks” show and that he wanted to ask Allen about his arrest record.

Allen supporters cheered as they dragged Stark away in handcuffs:

On Saturday, Allen supporters formed a human wall to block Stark’s access to the senator, who is in a tight election race with Democrat Jim Webb. As Stark tried to sidestep the wall, he brushed the side of a supporter, who fell. A deputy sheriff grabbed Stark, put his arm behind his back and led him away to the cheers of about 100 Allen supporters.

AFter his violent rage at George Allen political stop this week, Mike Stark was rewarded with a blogpost at the Leftist Huffington Post and a contract with failing Air America.
(Here’s a tip, Mike… Don’t accept a check!)