He had knelt down to pray shortly before celebrating the Mass in the little Santa Maria Catholic Church of Trabzon, in the north of Turkey, on the Black Sea, when a young man shot him in the back twice with a pistol, shouting out “Allah Akbar” (God is great.)

Now that young 16 year old boy claims he was trying to shoot a Jesus icon on the wall when he shot two rounds into the back of Father Santaro while screaming “Allah Akbar”!!

“I meant to shout ‘Allah-u Aqbar’ (Allah is Great) and frighten the priest by shooting the Jesus icon on the wall. The priest was praying at that moment. I closed my eyes with my hand and fired the gun with my other hand. When I realised that I shot the priest, I was shocked, and I asked myself ‘Did I kill the man?’ and felt deep regret”, said the boy according to an excerpt of his testimony published by the daily Sabah.

The Trabzon court found the boy – identified because of his age only as O.A. – guilty of the murder of Father Andrea Santoro, 60 and rejected the boy’s claim that the shooting was accidental because he had shot the gun twice.

While the boy’s conviction for “planned killing”, “carrying an unlicenced gun” and “destruction of public security” – warrented a life sentence, the penalty was reduced on account of his age, the court said.

Besides the murder of Father Andrea Santoro, there were two other attacks on priests in Turkey in February and March, 2006. 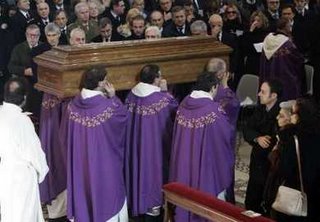 Priests carry the coffin of slain Italian Roman Catholic priest Andrea Santoro, as his mother Maria Polselli (2nd R) and other family members watch, at the end of his funeral in Saint John Basilica in Rome February 10, 2006. Santoro, the Italian priest murdered in a church in Turkey has all the makings of a Christian martyr and should be put on the road to sainthood, Italy’s top cardinal Camillo Ruini said at his funeral. (REUTERS/DARRIN ZAMMIT)