The Islamic Party of Turkey let the Pope know on Sunday how they felt about his planned visit to their country. 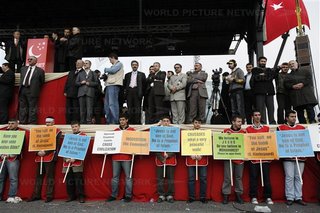 Members of the Islamic party “Saadet Partisi” (the Felicity Party) followers protest against this week’s visit of Pope Benedict XVI to Turkey. (WPN) 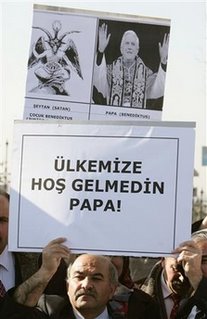 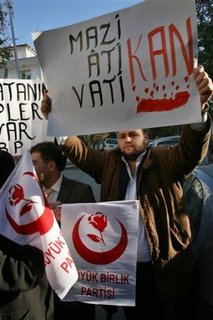 A small group of about 20 people, one holding a sign reading “blood in the past, blood in the future, blood in the Vatican”, protest the visit of Pope Benedict XVI in Ankara, Tuesday Nov. 28, 2006. (Yahoo)

The protesters also petitioned the government to once again convert the sixth century Byzantine monument of St. Sophia (Ayasofya) in the old city in Istanbul, into a mosque. 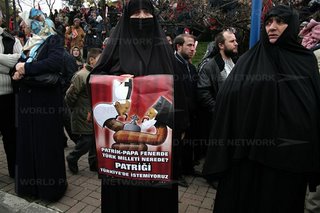 The Turkish police estimated that 25,000 people showed up in Istanbul, Turkey on Sunday, Nov. 26, 2006 to express their objection to Pope Benedict XVI’s scheduled trip to Turkey. The protest was organized by the pro-Islamic political party Saadet Partisi (the Felicity Party); much of their anger is directed at a remark Pope Benedict XVI made in September when he quoted a Byzantine emperor who characterized some of Muhammad’s teachings as “evil and inhuman.” The sign roughly reads, “The pope is here, but where is the protest from the Turkish people? We don’t want him in Turkey.” (WPN)

Previously:
Radical Islamists Rally and Wait for Pope in Turkey