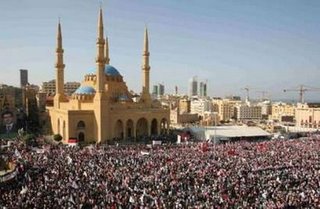 And once again, the Lebanese did not bow to terror. (Reuters)

Tens of thousands of Lebanese gathered to bid farewell to Pierre Gemayel! 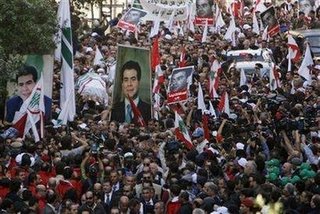 The BBC has video on the assassination of Pierre Gemayel HERE.

Amin Gemayel broke down during the funeral of his assassinated son, Pierre. 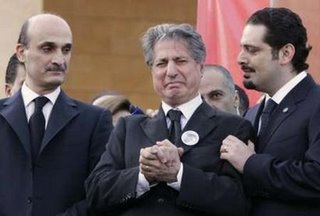 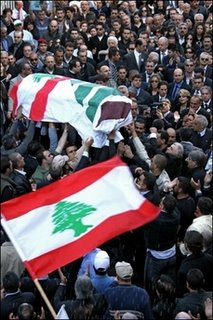 Lebanese mourners wave a national flag in front of the coffin of assassinated minister Pierre Gemayel in the Bikfaya. (AFP)

Beirut was a sea of red and white as tens of thousands gathered to honor Pierre Gemayel who was assassinated two days ago:

Hours before the lunchtime funeral at the Maronite St George Cathedral, tens of thousands of people were already gathering in the nearby Martyrs’ Square, many of them bused in from the provinces in huge convoys.

Lebanese troops, backed by armoured vehicles, were out in force across the capital for the funeral of Industry Minister Pierre Gemayel, the sixth critic of Syria to be assassinated in the past two years.

The anti-Damascus politicians who run the government were quick to point the finger at Syria, and had called for a huge show of public determination to be rid of the meddling of its larger neighbour.

The leader of the anti-Syrian majority in parliament, Saad Hariri, who himself lost his father to an assassin’s bomb last year, called on people across the nation to attend the funeral in a “show of support for freedom and independence”.

Initial reports estimate that over 200,000 attended the funeral today. 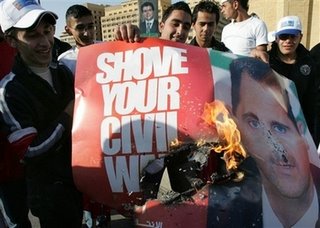 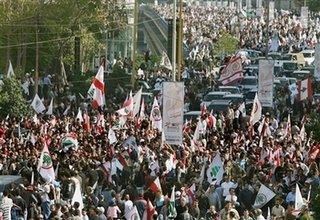 Lebanese mourners carry the coffin of Pierre Gemayel, wrapped in the flag of his Phalange Party. (AP) 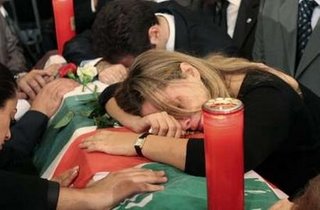 Patricia Gemayel, the wife of assassinated Lebanese Industry Minister Pierre Gemayel, cries over his coffin with his brother Samir inside a church in Beirut November 23, 2006. (REUTERS/Rafi Barberian)

Right Wing Nuthouse has an extensive rounup of events today.
A Blog for All has more on the Anti-Syrian demonstrations.
Publius Pundit has much more.
Pajamas Media has an exceptional roundup.