(Oh, did I mention the leaked news is negative?… It is.)

Here is a picture of the unreported good news from Iraq this week: 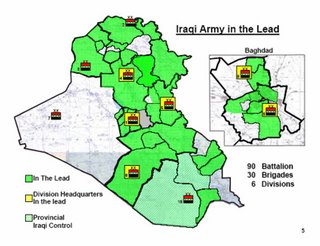 This terrific news came out in this past week on the security developments in Iraq but failed to garner any attention from the mainstream media.
The Multi-National Forces reported:

Iraqi security forces continue to develop into a capable force and continue to take the lead. On Tuesday in Ramadi, the 3rd Battalion of the 1st Brigade of the 7th Iraqi Army Division assumed responsibility in its area of operations.

There have been isolated clashes recently in locations around Iraq between the militias and government of Iraq forces, such as in Amarah, Diwaniyah. We’ve seen sectarian violence in Balad and Saba al-Bor, primarily between Sunni and Shi’a. These clashes have garnered sensational headlines, however, they are not clashes that had uncontrolled continued violence. What we saw, to the credit of Iraqi security forces and local leaders, was some action. In each case, Iraqi security forces, acting on their own, played a critical role in quelling the violence within days. Local leaders, both political and religious, in coordination with Iraqi security forces, came together to take action necessary to prevent the violence from spiraling out of control.

So what we see in actions taking place all over Iraq is that Iraqis are taking charge of their country, and they’re doing it valiantly. Violence will flare up again in areas that are under Iraqi control. The question will be, can they handle these situations themselves? In all these incidents they did; they responded and they returned calm to the areas. The Iraqis brought an Iraqi solution to an Iraqi problem, which is precisely the strategy for Iraq.

But this leaked news made the headlines. This leaked document published in the New York Times claims the current situation in Iraq closing in on civil war. 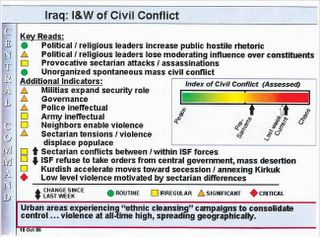 The Corner also wonders if it is time yet for treason charges:

I would just like to point out that the New York Times appears to have doctored the slide referred to in this brilliantly well-timed bit of election propaganda by removing the classification markings which are invariably found at the top and bottom of these slide (even when they are unclassified — and this one was classified, as Central Command has already confirmed). I want to know whether there is any level of national secret the Times is not willing to betray for the political advantage of its pet causes. And I would like to know what else they may have doctored on the slide.

And while we’re at it, I would love to understand why the law doesn’t prohibit the propagation of strategic national secrets in wartime — which has always been understood as treason.

Good point! How the Times gets away with continually leaking classified information to the public; information that consistently demeans our soldiers and assists our enemies is beyond belief.

Will the government ever take action and hold leakers responsible?
You have to wonder.

Update: The Pentagon is looking into this latest leak to the New York Times.