The students in Santa Cruz were not impressed with the planned land redistribution by Bolivian President Evo Morales and let him know it! 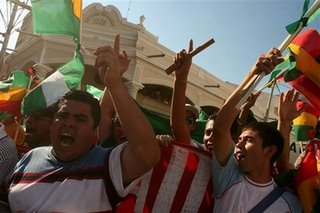 Students of the eastern state of Santa Cruz shout as they demonstrate against the government of Evo Morales in Santa Cruz de la Sierra, some 650 kilometers (404 miles) east of capital La Paz on Tuesday, Nov. 21, 2006. (AP)

Marxist Bolivian leader Evo Morales barely escaped unharmed after his speech in Santa Cruz was interrupted on Saturday.
Dominican Today has the story:

The event was registered around 18:00 hours local time (22:00 GMT) and was transmitted by television channel ATB, that showed the presidential caravan under harassment of a stone rain thrown by Santa Cruz college students.

The president had gone to the Gabriel René Brown University to sign an agreement with its director, he interrupted his speech after being notified by his security agents of impending threat from a manifestation that was brewing outside the building.

Immediately, Morales left and boarded his vehicle, which took hits of several projectiles, stones and pieces of bricks thrown by students, who question his work in government.

In the escape, television registered the moment when one of the security agents had to use his body to shield the president from flying projectiles.

Six of the country’s nine regional governors broke ties with Evo Morales last weekend over his plans on revising the constitution.

Earlier in the week Bolivians held a massive rally against Morales… 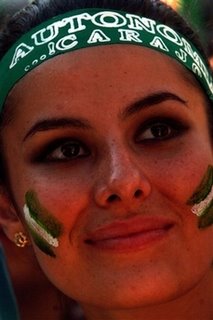 A Bolivian teenager, resident of the eastern state of Santa Cruz shows her face painted in regional green and white colors and a bandana reading ‘Autonomy’ while demonstrating against the government of Evo Morales in Santa Cruz de la Sierra, some 650 kilometers (404 miles) east of capital La Paz on Tuesday, Nov. 21, 2006. (AP)

A M Mora y Leon at Publius Pundit has more on this incident and the disappointing election in Ecuador over the weekend.