World Series MVP David Eckstein joined the growing number of celebrities and sports heroes in campaigning against Amendment 2 in Missouri! 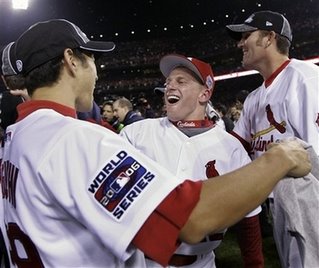 St. Louis Cardinals MVP David Eckstein, right celebrates with So Taguchi after defeating the Detroit Tigers to win the 2006 World Series in Game 5 of the World Series on Friday, Oct. 27, 2006 in St. Louis. (AP)

As the Nov. 7 elections near, Missouri’s Senate race is intertwining with a ballot measure that would engrave the right to conduct embryonic stem cell research into the state constitution. Republican Sen. Jim Talent opposes it. Democratic challenger Claire McCaskill supports it. (AP)

But, today was the first time that Missourians saw MVP eckstein take his talents and celebrity onto the field of politics.
The St. Louis Post Dispatch reported:

While Suppan appeared in a television commercial against Amendment 2 during the World Series, this is the first time that Eckstein’s name has appeared in campaign materials.

The ad is set to run today in newspapers across the state, including the Post-Dispatch. It features an “open letter to the people of Missouri” signed by Eckstein, Suppan and Kansas City Royals player Mike Sweeney.

HERE is the powerful ad that was put together in response to the dishonest McCaskill ad released in October.