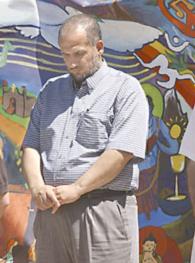 Omar Shahin from Phoenix was removed from the US Airways plane after he stood and recited Muslim prayer with 5 other imams on the plane before takeoff. The imams refused to leave the plane and had to be escorted off.

** ABC5 has video on the incident.

The six men were detained, questioned, given a refund for the cost of their tickets and told they could not fly on US Airways.

Charles Johnson reported on this story last night.
Six Muslim imams were removed from a US Airways flight at Minneapolis-St. Paul International Airport on Monday and questioned for several hours before being released.
ABC5 reported:

A passenger initially raised concerns about the group through a note passed to a flight attendant, according to Andrea Rader, a spokeswoman for US Airways. She said police were called after the captain and airport security workers asked the men to leave the plane and the men refused.

“They took us off the plane, humiliated us in a very disrespectful way,” said Omar Shahin, of Phoenix.

The six Muslim scholars were returning from a conference in Minneapolis of the North American Imams Federation, said Shahin, president of the group. Five of them were from the Phoenix-Tempe area, while one was from Bakersfield, Calif., he said. 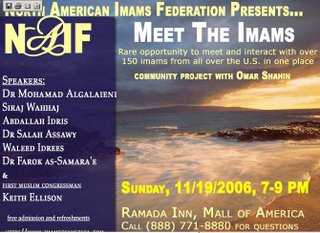 A flyer from the Imam’s Meeting in Minneaplois over the weekend with Congressman Keith Ellison.

Three of them stood and said their normal evening prayers together on the plane, as 1.7 billion Muslims around the world do every day, Shahin said. He attributed any concerns by passengers or crew to ignorance about Islam.

“I never felt bad in my life like that,” he said. “I never. Six imams. Six leaders in this country. Six scholars in handcuffs. It’s terrible.”

Ibrahim Hooper, spokesman for the Washington-based Council on American-Islamic Relations, expressed anger at the detentions.

“CAIR will be filing a complaint with relevant authorities in the morning over the treatment of the imams to determine whether the incident was caused by anti-Muslim hysteria by the passengers and/or the airline crew,” Hooper said. “Because, unfortunately, this is a growing problem of singling out Muslims or people perceived to be Muslims at airports, and it’s one that we’ve been addressing for some time.”

As long as Muslims are trying to explode their shoes on Trans-Atlantic flights, planning to use baby bottles as bombs from London to New York, and smashing jets into skyscrapers, we will see more instances like this one.

The six imams might as well get used to it.

Dan Riehl has more on the imams.