A shaky Saddam Hussein was back in court on Tuesday as his genocide trial on the Anfal Campaign resumed. 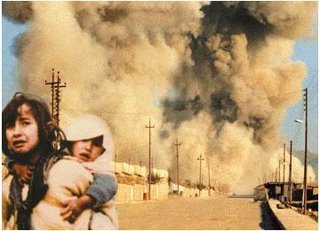 The Iraqi government said that Saddam could be executed by the end of the year before his second trial is decided.

The following is a translation by Haider Ajina from the Iraqi Buratha News of November 7, 2006:

Saddam collapses and asks for leniency and mercy from Judge.
By Muhsin Aljaberi

It seems that Saddam is using a new approach in dealing with the court. It reflects his desire for forgiveness for his crimes. This new approach only started after he was sentenced to hang for his crimes in Dujail. Sources in the high criminal court handling Saddam’s cases said that the dictator did not anticipate this verdict or the seriousness of the court.

Saddam believed the lies of his fellow Baathists media and propaganda (which was directed by his defense team under the leadership of Khalil Alnuaimi), which was saying that the USA wishes to negotiate with him and that Rumsfeld wished to reinstate him to stop the violence and other such lies. Thus the court’s sentencing him to hang came as a big shock to Saddam.

The media did not report his behavior since he reappeared, Saddam’s legs were shaking and he could not stand a number of times when called upon. The sources said that the video filmed for the court shows that the bailiff had to help him stand, and that he was wobbly once he stood up, and when he was spoken to he appeared bewildered and did not know what to say except invoking God’s mercy. As Saddam was escorted back to his cell he sends word to the judge Raauf asking for mercy and clemency. This information was confirmed by the court today.

If we had any doubt that the Batthist or Alqaida or any of the terrorist and criminal groups in Iraq pay attention to our media or what our politicians say this article should remove all that doubt. These groups, which our military and Iraqi security forces are fighting, pay very close attention to what our politicians are saying and twist (in some cases they do not even have to twist) what they say to create fear and doubt in the Iraqi street.

The average Iraqi does not yet fully comprehend that a member of our house or senate does not represent the whole government and is not alone a strong deciding factor in our foreign policy. Talk of pulling out immediately or of perhaps installing a new strong (dictator) government brings shivers to many Iraqis and emboldens the terrorists.

Saddam’s behavior once he realized he is now completely defeated showed his cowardice and weakness. If this former leader is behaving in this manner then what will his followers do once they realize that their defeat is inevitable if we stay and keep training Iraqis to fight them?

But, Saddam still has his friends… 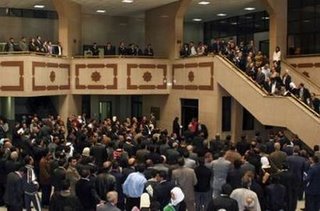 Saddam Hussein was back in court on Tuesday to face charges of genocide against ethnic Kurds, two days after being sentenced to hang for the killing and torture of Shi’ites. (Reuters/Majed Jaber)