On Armistice Day, November 11, 1918, the fighting from World War I ceased at 11 am. Around the world people celebrated the end to the final and greatest war the world had ever seen up to that point in history… The war to end all wars.

The small town of Herring, Iowa joined in the jubilation. The town’s folk and local farmers gathered at the bottom of the Herring Hill near the center of town. They took two long poles and spliced them together with wire. Later that night the Herring folk celebrated the end of the Greatest War the world had ever seen by hoisting the towering flagpole and proudly flying Old Glory in the town center. 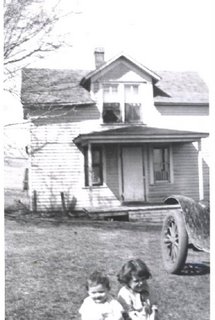 Many years had passed when Ralph Dean, one of the children there at the 1918 Armistice Day celebration in Herring, took over the Herring general store and brought his family there to live in 1931. Herring at that time had a country store complete with post office, a grain elevator, a Northwestern Railroad Depot, a lumber yard, and a dance hall. The country school was down the hill by the train tracks. Herring was established as a trading town and in its early years had a pool hall, a blacksmith shop, and a livestock yard for the railroad. But that was before Ralph and Alice Dean moved there to raise their 3 girls, Dorothy, Shirley and Betty and run the country store. 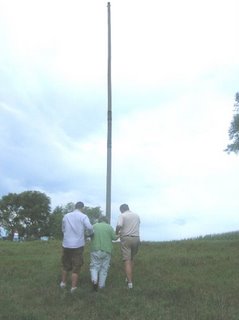 Dorothy is helped up the Herring Hill in 2005 by her grandson David (l) and her son Tim (r). The “Armistice Pole” from 1918 is the only “structure” left standing in the ghost town that was once Herring, Iowa.

In 2005, the Dean girls returned to Herring, Iowa. There is no longer a train depot in the town. The country store burned down in the 1950’s. The dance hall was torn down after World War II by returning veterans to use the lumber in building homes for their families. There are no homes left standing there on top of the Herring hill. But the Dean girls were coming home, anyway!

It has been more than 80 years since Armistice Day, in 1918. A lot of water has trickled down that stream at the bottom of the Herring hill since that time. The Dean girls moved on from Herring and raised their families and lived their lives. Ralph and Alice both passed away. Dorothy, the eldest Dean girl, is now in her 80’s. The Dean girls knew that there wasn’t enough left in the town of Herring but Dorothy and her sisters wanted to go back to see Herring, Iowa, anyway. So, in 2005, after the annual round of golf at the “Ralph Dean Golf Classic”, Dorothy, Shirley and Betty went back to Herring. Dorothy, who has had health problems the last few years, was lifted over the barbed wire fence surrounding the hill by her sons and grandson. And, the three Dean Girls climbed the Herring Hill as they had done a thousand times before.

It is the same hill, but, Herring has changed. It is not the same country town they remembered…

In fact if you were driving west of Wall Lake, Iowa and didn’t know when or where to stop, you would drive right past Herring. The only remaining structure in Herring was put up on an Armistice Day nearly a century ago… The flag pole… the one that was spliced together to celebrate the end of World War I, on November 11, 1918, still stands tall in the town center, now a meadow. 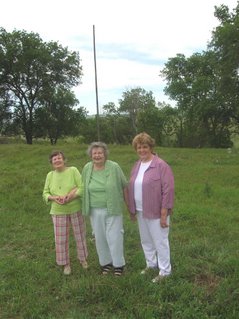 (l to r) Shirley, Dorothy and Betty, “The Dean Girls” return to Herring. The Herring flag pole stands tall in the background in a field that was once Herring, Iowa.

This is dedicated to my mother and her sisters “the Dean Girls” and to Ralph and Alice Dean. I am also dedicating this to the lost “Herrings” in every state, and to all of the Great Americans and veterans who made this country what it is today!

Michelle Malkin has a wonderful roundup for Veterans Day 2006.
Blackfive and I Love Jet Noise have the story on Marine Cpl. Jason Dunham who will be awarded the Medal of Honor this week.
Iowa Voice is honoring veterans all weekend.