After a delay, the Iraqi and US leaders met to discuss the future of the Iraqi democracy this morning. 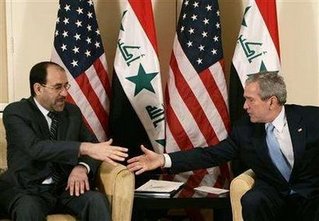 Here is the Joint Statement from the two leaders:

We were pleased to continue our consultations on building security and stability in Iraq. We are grateful to His Majesty King Abdullah II of Jordan for hosting these meetings here in Amman.

Our discussions reviewed developments in Iraq, focusing on the security situation and our common concern about sectarian violence targeting innocent Iraqis. In this regard, the Prime Minister affirms the commitment of his government to advance efforts toward national reconciliation and the need for all Iraqis and political forces in Iraq to work against armed elements responsible for violence and intimidation. The Prime Minister also affirms his determination with help from the United States and the international community to improve the efficiency of government operations, particularly in confronting corruption and strengthening the rule of law.

We discussed the plague of terrorism in Iraq which is being fomented and fueled by Al Qaeda. The people of Iraq, like the people of the United States and the entire civilized world, must stand together to face this common threat. The Prime Minister affirmed that Iraq is a partner in the fight against Al Qaeda. We agreed that defeating Al Qaeda and the terrorists is vital to ensuring the success of Iraq’s democracy. We discussed the means by which the United States will enhance Iraq’s capabilities to further isolate extremists and bring all who choose violence and terror to full justice under Iraqi law.

We discussed accelerating the transfer of security responsibilities to the Government of Iraq; our hopes for strengthening the future relationship between our two nations; and joint efforts to achieve greater cooperation from governments in the region and to counter those elements that are fueling the conflict.

We received an interim report from the high-level Joint Committee on Accelerating the Transferring of Security Responsibility, and encouraged the Committee to continue its good work. We agreed that reform of the Iraqi security ministries and agencies and addressing the issue of militias should be accelerated. The ultimate solution to stabilizing Iraq and reducing violence is true national reconciliation and capable and loyal Iraqi forces dedicated to protecting all the Iraqi people.

We are committed to continuing to build the partnership between our two countries as we work together to strengthen a stable, democratic, and unified Iraq.