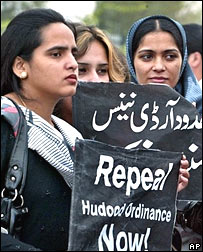 Until the law was amended on Wednesday, rape cases in Pakistan were dealt with in Sharia courts. Victims had to have four male witnesses to the crime – if not, they faced prosecution for adultery. 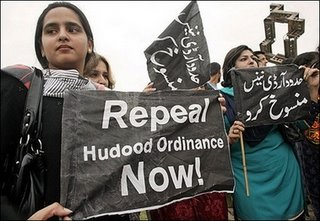 Pakistani NGO activists stage a protest outside the parliament building during a national assembly debate on rape laws in Islamabad on 15 November 2006. Islamic fundamentalists called for mass protests after Pakistan’s parliament voted that rape and adultery cases should no longer be heard under the country’s harsh religious laws.(AFP/Farooq Naeem)

Islamic fundamentalists called for mass protests after Pakistan’s parliament voted that rape and adultery cases should no longer be heard under the country’s harsh religious laws.

Lawmakers on Wednesday overwhelmingly approved a bill introduced by the government of military ruler President Pervez Musharraf that will overhaul widely criticized religious legislation dating back to 1979.

The laws currently say that women must produce four Muslim male witnesses as evidence of rape — an almost impossible burden of evidence — or potentially face adultery charges themselves.

“We will protest countrywide against the bill and the policies of the military dictator,” said Liaquat Baloch, deputy leader of the MMA (Muttahida Majlis-e-Amal, United Action Front), an alliance of Islamic parties.

The alliance’s supreme council met in Islamabad Thursday to decide whether to resign from parliament as it has threatened. 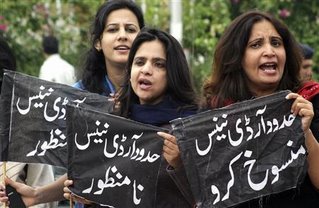 Women rights activists chant anti-government slogans during a protest outside the Parliament building in Islamabad November 15, 2006. Rights activists welcomed on Thursday amendments to Pakistan’s Islamic laws that will allow rape victims to seek justice without the need for four male witnesses but said the laws should be scrapped altogether. The signs read, “Hudood Ordinance unaccepted” (C and L) and “Cancel Hudood Ordinance” (R). (REUTERS/Faisal Mahmood)

Previously:
Pakistani Women Rally For Their Right to Be Beaten