Free Thoughts reports on the latest “rage” in Pakistan this fall season…
The latest look is once again all about mystery! 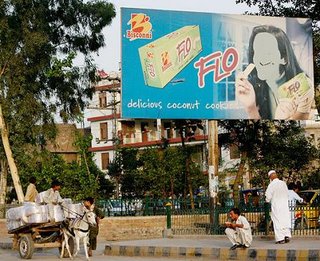 The Taliban is making inroads into the fashion industry in the North West Frontier Province in Pakistan.
Hindustan Times reports:

The recent rage against women, especially in Pakistan, forces one to sit up and think: Is this the same nation where once Benazir Bhutto dared to take on the male bastion?

Rapes, honour killings and a plethora of religious edicts against women are not new to Islamic society, and the status of women keeps getting worse.

In a fresh twist, women’s faces on billboards across Pakistan, especially in the North West Frontier Province (NWFP), are now being defaced.
Reason? “These multinational companies want to promote obscenity, lewdness and vulgarity,” religious leader, Shehzada Babar is quoted as saying in UK’s First Post magazine.

The depiction of women sans hijab or headscarf is considered un-Islamic by Muslim radicals and the Taliban, whose influence is growing in the North West Frontier Province (NWFP). 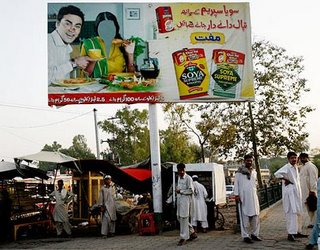