One Man's Terrorist Is Another Man's Freedom Fighter

Especially if the freedom fighters happen to be arrested in a communist regime! 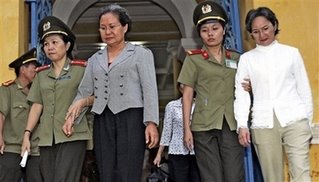 Thuong Nguyen ‘Cuc’ Foshee of Orlando, Fla., third from left, and Huynh Bich Lien ‘Linda’ of San Gabriel, Calif., right, are escorted from court following their trial Friday, Nov. 10, 2006, in Ho Chi Minh City, Vietnam. The pair and five others were convicted by a Vietnamese court on terrorism charges after being accused of trying to take over radio airwaves and call for an uprising against the government. The defendants, all of Vietnamese descent, had been jailed without charges for more than a year, prompting Washington to pressure Hanoi to move forward swiftly and fairly. (AP Photo/David Longstreath)

Vietnam jailed 3 US citizens this week on “terrorism” charges. They were hoping to set up an anti-communist radio programs.
The BBC reports:

Three US citizens and four Vietnamese have been sentenced to 15 months jail for terrorism, a Hanoi court has ruled.

Taking into account time already served the seven could be freed in a month, when the US citizens face expulsion.

The seven were accused of trying to set up illegal radio transmitters to make anti-communist broadcasts.

All of the seven defendants are of Vietnamese origin, but three – Nguyen Thuong Cuc, also known as Cuc Foshee, Huynh Bich Lien and Le Van Binh – also have US citizenship.

Local press reports have linked them to a California-based anti-communist organisation called the Government of Free Vietnam.

They are alleged to have brought transmitters and other equipment into Vietnam from neighbouring Cambodia.

They were hoping to take over local radio stations and broadcast anti-government radio messages, according to the BBC’s correspondent in Hanoi, Bill Hayton.

The charges carried punishments ranging from up to 12 years jail to execution, but prosecutors said their more lenient sentences reflected the face the defendants had repented and had no previous criminal records.

These terrorists were not exactly packing bombs… just radio transmitters.