The threat of an attack by al-Qaida-linked terrorists increased sharply in advance of President Bush’s Indonesian stop on Monday. 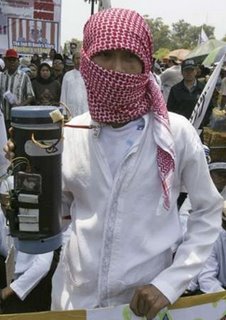 A group of some 50 students tried to break through the police cordon at the barricade, and scuffled with police before being hustled off.

An estimated 15,000-strong contingent of security forces locked down the center of Bogor and soldiers lined the highway from the airport to the summer palace while Bush helicoptered to his meeting with Yudhoyono.

Police said they had received unconfirmed reports a suicide bomber could be planning an attack and that teams of police and soldiers had been deployed to search and secure the area around the palace. 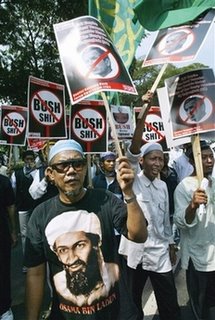 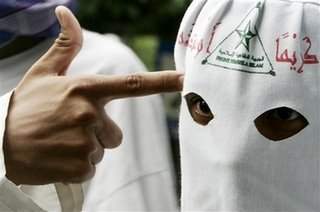 An Indonesian Islamic protestor gestures during a demonstration against a visit by U.S. President George W. Bush Monday, Nov. 20, 2006 in Bogor, Indonesia. Police were probing unconfirmed reports that a suicide bomber was planning an attack during President Bush’s visit to Indonesia, where thousands rallied against American foreign policy in the Mideast and the Iraq war. (AP Photo/Ed Wray)

Michelle Malkin and Atlas have more on the dangerous radicals who may have plans for Bush.