Powerline reported today on the latest violence in Iraq:

I found that the murder rate in Iraq was 140 per 100,000 (the usual way in which murder rates are expressed). I was surprised, therefore, to learn this morning that rate of violence has increased only slightly:

The United Nations said Wednesday that 3,709 Iraqi civilians were killed in October, the highest monthly toll since the March 2003 U.S. invasion and another sign of the severity of Iraq’s sectarian bloodbath. 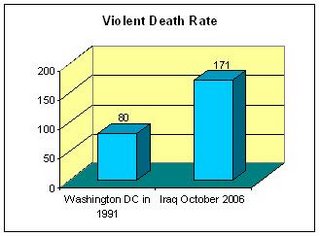 That compares to an estimated 3,500 killed in July. If 3,709 people were murdered in October, that translates to a rate of 171 per 100,000. That is a high rate of violent death. But, for purposes of comparison, the murder rate in Washington, D.C. in 1991 was 80 per 100,000. So the rate of violence in Iraq today is just over double the rate in the District during the first Bush administration. I don’t recall anyone describing conditions in Washington in the early 90s as a “bloodbath.”

This latest violence in Iraq means that we saw nearly as many violent deaths in Iraq last month per day as a typical day in Brazil last year: 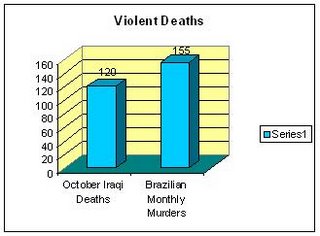 According to the Justice Ministry: