Nasrallah calls for the Lebanese government to be toppled!
…Video HERE. 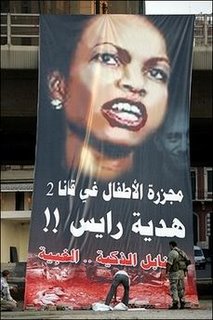 This appears to be a recurring theme for Hezbollah. Obviously, they see Condi Rice as quite a threat. A Jacksonian has more on this earlier banner from the 33 day war with Israel.

Hezbollah leader Hassan Nasrallah is calling for major protests to take down the current government of Lebanon in favor of a national unity government (one where Hezbollah has more control):

Nasrallah accused Siniora of falling under the influence of the US.

The US has repeatedly reaffirmed his country’s support for the Siniora government, which is dominated by anti-Syrian factions.

“We want to liberate our country from the hegemony of US Ambassador Feltman and the bloodsucker Rice,” he said, referring to Condoleezza Rice, the US secretary of state.

Lebanese Saad al-Hariri, the head of Lebanon’s governing Future Bloc and son of the assassinated former prime minister, Rafiq al-Hariri, said that the current Lebanese president Emile lahoud who is siding with Nasrallah has many questions to answer:

Hariri said Lahoud had many questions to answer.

Hariri also said hurdles were being placed in the path of the UN investigation into the killing of his father along with 22 others in a massive bombing in Beirut in February 2005, and blamed foreign powers for stirring up political unrest in Lebanon.

President Emile Lahoud on Saturday said that he would no longer recognize the current Lebanese government.

Six pro-Syrian ministers, including 5 Shiites, quit the Siniora government eight days ago over its decision to approve a UN plan for an international tribunal to try the suspected killers of former PM Rafiq Hariri, including high Syrian officials.

In other Lebanese news from the Jerusalem Post… “Shiite death squads” acting under Iranian religious edicts are preparing to attack Sunni Muslims in Lebanon.