Only 10-15% of registrations were legitimate from the 5,000 voter registration cards turned in by ACORN employees in St. Louis:

The St. Louis elections director estimated that after investigating 5,000 registrations turned in by ACORN, only 10 to 15 percent were legitimate and it had appeared that names had been copied from the phone book. 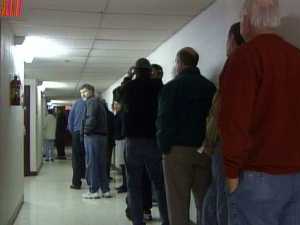 New machines are coupled Tuesday with the expected high voter turnout, leading to significant waits at some polling places.

Democrats needed to gain 15 House seats or six in the Senate to form a majority, a development that would give them a stronger voice against a war that has cost more than 2,800 U.S. lives and has come to be seen by most Americans as misbegotten.

Sharply critical of Bush’s prosecution of the war throughout the campaign, Democrats nevertheless lack a common position on how to get the U.S. out. 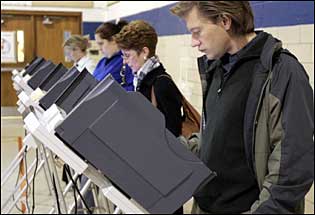 Several voters in Jennings, Missouri were turned away for not being registered:

Denise Lieberman with the Washington-based group Advancement Project says some residents in the St. Louis suburb of Jennings were told they were not on the voting rolls.

The St. Louis County Election Board chairman John Diehl denied these reports from Jennings saying they had not heard one complaint.

John Fund has the timeline of tonight’s events at the Opinion Journal.
Via Instapundit

I’m with Mark Steyn on this one.
Pajamas Media and Kesher Talk have big roundups.

Previously:
What You Need To Know About Exit Polling
Massive Turnout Expected in Missouri