** This is a major stem cell development just days before Missourians go to the polls to vote on embryonic research!

This is a very significant development because Missourians are going to the polls on Tuesday to vote on protecting this science by adding it to the state’s constitution!

The scientists at University of Missouri may soon join Dr. Woo Suk Hwang who was forced to make a tearful apology after he admitted to fabricating his human cloning work earlier this year. 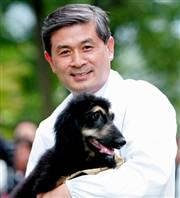 Missouri scientists may soon be joining Dr. Woo and Snuppy in the trash heap of bogus scientific studies!
The Columbia Journal reported:

An investigation is looking into the reliability of life science research conducted by a team led by the University of Missouri-Columbia’s recognized expert in reproductive biology, the Columbia Tribune reported.

The team was led by R. Michael Roberts. Rob Hall, research integrity officer for the university, confirmed the inquiry into findings reported in Science magazine in February. The magazine issued an alert last week advising scientists that the research “may not be reliable.”

The only other alert issued in Science was related to the work of South Korean scientist Woo Suk Hwang, (Woo claimed to have cloned the first human embryos and to have extracted stem cells from them)who later admitted he fabricated research into embryonic stem cell research and cloning.

Katrina Kelner, the magazines deputy editor for life sciences, told the Tribune the warning was published after members of the scientific community questioned the findings and university officials confirmed that a preliminary inquiry indicated there might be a problem.

“They found enough evidence that they thought a full investigation was warranted,” Kelner said. “On the basis of what they told us, we felt it important to inform the scientific community. We want to prevent people from building on this work when they should not or citing it in papers they write or basing their experiments on this.”

At issue was research by Roberts and three others at Missouri indicating that immediately after the first division of a mouse embryo, the two cells take different paths. One cell was bound for creation of a placenta while the other began forming the fetus.

The issue that was raised, Kelner said, was that the results were implausible “based on what is known experimentally already.”

“So independently, those people contacted the University of Missouri and they did what they should have done. They started an inquiry,” Kelner said.

R. Michael Roberts, the lead researcher, is a big advocate for Amendment 2 in Missouri.

But this news may be too late. Missourians will have already voted on stem cell research before Science Magazine completes its investigation!
Hat Tip K. Crouch