Here is a bit of bright news from Florida today.

They call him “Lucky”… 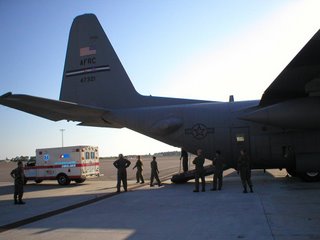 Lance Cpl. John McClellan returns from Iraq where he survived a hit by a sniper’s bullet.
Hat Tip George Lauer

The third time time he was shot was the luckiest day of Lance Cpl. John McClellan’s life. A sniper’s bullet somehow flew barely under the Marine’s helmet, hitting just above his left ear. It severed facial nerves and parts of his ear, ripped a hole in the lower section of his skull and brain, and tore its way out through the back of his neck. But it missed his carotid artery by the thickness of a few sheets of paper. And it missed vital sections of his brain. It missed his vision and vocal controls, too.

And, here is a letter sent out yesterday from Connie McClellan, John’s mother who is down in Florida supporting him:

Yesterday, John walked 400 steps without a walker with only his physical therapist using a chest strap to help him keep his balance. This was the first day John has been really encouraged that he really will someday walk again, so needless to say he was VERY pleased.

Yesterday morning the Marines had a cake cutting ceremony for the 231st birthday of the Marine Corps. They had the youngest Marine and the oldest Marine at the hospital be the recipients of the first pieces of cake. John was the youngest and an 80 year old was the oldest. They had some of Marine big wigs to conduct the ceremony. It was very cool.

Then, five of the Tampa Bay Buckeneers came by for a photo shoot. I’ll forward the pics as soon as I can get to the computer that will let me download. Also very cool.

That’s all for now. John has his eye exam today, so we’re VERY anxious for this exam,as at this point his left eye is VERY blurry.

Please pray: Thank you, Lord, that John’s left eye will be functional with corrective lenses, unless of course, Lord, you choose to heal it all together. Your ways are higher than our’s, Lord. Whichever way you do it is fine with us, in Jesus’ name. Amen,.

Lance Cpl. John McClellan is expected to return to Missouri by Thanksgiving Day.

Previously:
The Life of Lance Cpl. John McClellan… A Story Too Hot for CNN