“Today Pierre was martyred for the cause. He died for Lebanon, for freedom, and for humanity. Those who love him will not desecrate his memory with acts… We want the Lebanese cause to triumph. I wish upon all those who loved Pierre to safeguard the cause.”

Amin Gemayel
On the death of his son, Pierre Gemayel
November 21, 2006 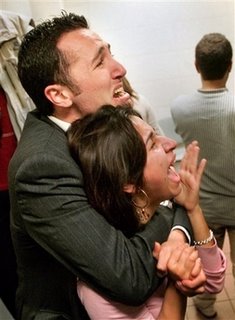 Two supporters of anti-Syrian Christian politician Pierre Gemayel, who was assassinated in a suburb of Beirut on Tuesday, grieve outside the emergency ward at the St. Joseph’s hospital where his body was brought on Tuesday, Nov. 21, 2006. (AP)

One of two bodyguards died in the ambush; one survived. 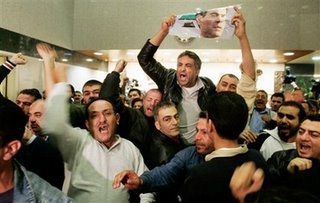 Furious supporters of prominent anti-Syrian Christian politician Pierre Gemayel, who was assassinated in a suburb of Beirut on Tuesday. (AP)

After ominous warnings this on Sunday by Hassan Nasrallah that Hezbollah would topple the Lebanese government, anti-Syrian Christian minister Pierre Gemayel was murdered today in Beirut!

Syria is being blamed for the attack today!

HERE is the video of Nasrallah from Sunday warning the Lebanese that Hezbollah will topple the US backed government… with special blame on “Bloodsucking Condoleezza Rice”. 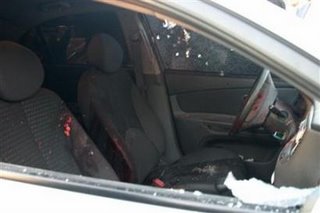 His fatal shooting will certainly heighten the political tension in Lebanon, where the leading Muslim Shiite party Hezbollah has threatened to topple the government if he does not get a bigger say in Cabinet decision making.

Witnesses said Gemayel was shot in his car in Jdeideh, a Christian neighborhood, his constituency on the northern edge of Beirut.

Gemayel was rushed to a nearby hospital, according to the Lebanese Broadcasting Corp. and the Voice of Lebanon, the Phalange Party mouthpiece. The party radio later said he was dead, as did the National News Agency.

Saad Hariri, leader of the anti-Syrian parliamentary majority, broke off a televised news conference after hearing that Gemayel had been shot.

Gemayel, the minister of industry and son of former President Amin Gemayel, was a supporter of the anti-Syrian parliamentary majority, which is locked in a power struggle with pro-Syrian factions led by Hezbollah. 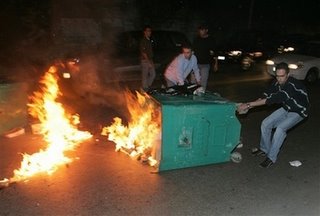 From Beirut to the Beltway has this report:

The assassination took place as Saad Hariri was declaring in a press conference that March 14 was ready for a “peaceful confrontation” with Hizbullah and the pro-Syrians parties, who want to stage a coup in the country and put Syria back in control through street protests.

Saad interrupted the press conference upon receiving the news. He then returned to announce that Gemayel was killed, and accused the Assad regime of trying to kill every free person in Lebanon.

Hariri said, chocking with tears, “There is nothing left to discuss with the killer Syrian regime. The international tribunal is between us, and let whatever happens happen.”

Samir Geagea had warned days ago that March 14 ministers 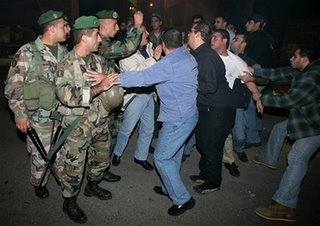 Angry Lebanese protesters scuffle with Lebanese army soldiers who try to calm down their reaction to the assassination of prominent anti-Syrian Christian politician Pierre Gemayel. (AP)

** From Beirut to the Beltway has several updates on the situation.
HotAir is following the developments.
Michelle Malkin has more.
Egyptian Sandmonkey has several pictures of angry Christians taking to the streets, and much more HERE.
Snapped Shot also has several updates.
Pajamas Media offers a list of anti-Syrian politicians gunned down since 2005.

Figures… Hezbollah blames Israel!
But… They’re not making believers of anyone!