Despite threats from Hezbollah to take down the government and the assassination of Pierre Gemayel earlier in the week, the Lebanese cabinet went ahead and approved an international tribunal to investigate the 2005 Hariri assassination.

Hezbollah says it will take to the streets next week to take down the government. 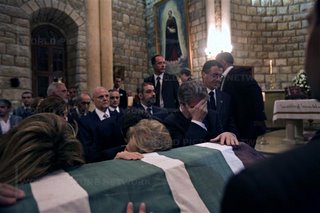 Amin Gemayel, father of slain cabinet minister Pierre Gemayel, prays with his wife over the coffin of their son. The family joined hundreds of supporters in his home village of Bikfaya in the mountains outside Beirut on Thursday, Nov. 23. (WPN)

Lebanon’s U.S.-backed government on Saturday approved the creation of an international tribunal to try suspects in the assassination of former Prime Minister Rafik Hariri, overriding objections by Hezbollah and the country’s pro-Syrian president.

The approval, though widely expected, was bound to deepen the country’s political crisis and spark mass street demonstrations threatened by Hezbollah and its allies to topple the government of Prime Minister Fuad Saniora.

An ongoing U.N. investigation into the February 2005 truck bombing that killed former Hariri and 22 others has said the killing’s complexity suggests the Syrian and Lebanese intelligence services played a role in the assassination. Damascus has denied any role in the killing.

The emergency session was held without the six pro-Syrian ministers from the parliament.

Down to just 17 ministers from the 24-member cabinet it began with last year, it barely mustered the statutory quorum of two-thirds plus one of its original complement stipulated by the constitution, and the loss of one more minister could have triggered its fall.

Ambassador Bolton says it is shaping up to be “a battle between democracy and terrorism”.

HotAir explains why it is too early to celebrate this victory.

From Beirut to the Beltway says that the Prime Minister was willing to delay the vote if the resigned Hezbollah members rejoined the cabinet. They didn’t.