Strategy Page has a report on the latest tragic numbers coming from Iraq with some interesting comparisons including this: 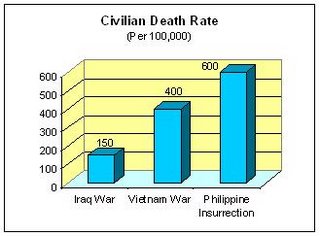 BTW– Only 10% of Iraqi deaths have been caused by US troops.

Michelle Malkin pointed out yesterday that Multi-Forces Iraq and Iraqi officials have a long list of problematic Iraqi Police/Ministry of Interior spokesmen quoted by the AP and other news services that the military says it cannot verify as legitimate employees. This list of IP/MOI problematic sources is published at Flopping Aces and includes these two spokesmen:

These two men have been giving death tolls to the press but are not official spokesmen for the MNF-Iraq or the Iraqi government. Since the AP started using these questionable Iraqi spokesmen the death rates in Iraq have gone up 300%! Is there a correlation or is it just coincidence?

Here are a few of the articles where Lt. Thaer Mahmoud showed up this past year and a half:

Six people were killed and 12 wounded when a suicide car bomber struck in Samarra, 60 miles north of Baghdad, police Lt. Col. Mahmoud Mohammed said. Four other people died when a car bomb exploded in west Baghdad as two armored cars passed by, according to police Lt. Thaer Mahmoud. More than 270 people have been killed since Nov. 18 in car bombings and suicide attacks in Iraq.

A roadside bomb targeting a police patrol exploded in an outdoor market in Baghdad on Saturday, killing four people and wounding 27, police said.
The victims were all civilians as the explosion missed the police patrol in the al-Sadriya market, police Lt. Ali Mitaab and Lt. Thaer Mahmoud said.

Gunmen in Baghdad intercepted a minivan carrying a coffin to the Shiite holy city of Najaf on Tuesday, killing all 10 people on board, police said. Another five people were killed in a double bombing at a restaurant near the Green Zone. The van was attacked in the volatile southern neighborhood of Dora by gunmen in two cars, police Lt. Thaer Mahmoud said, providing the casualty toll.

A roadside bomb targeting a police patrol went off in an outdoor market in Baghdad on Saturday, killing four people and injuring 27, police said. According to the AP, the victims were all civilians as the blast missed the police patrol in the al-Sadriya market, police Lt. Ali Mitaab and Lt. Thaer Mahmoud said.

Bombings and shootings on Tuesday killed at least 39 people in Iraq. According to the AP, the attackers pulled up in two cars and ordered the minivan to stop before opening fire in the southern neighborhood of Dora, police Lt. Thaer Mahmoud said.

An unidentified attack drove his truck into a crowded gas station north of Baghdad on Saturday, killing 12 people, and injuring 12 others, The Associated Press reported. Also nine cars were destroyed in the gas station bombing in Samarra, 60 miles north of the Iraqi capital, police Lt. Col. Mahmoud Mohammed said.

Michelle Malkin has a complete roundup of the Centcom press conference today including this:

From CPATT PAO:
BG Abdul-Kareem, the Ministry of Interior Spokesman, went on the record today stating that Capt. Jamil Hussein is not a police officer. He explained the coordinations among MOI, the Ministry of Health and the Ministry of Defense in attempting to track down these bodies and their joint conclusion was that this was unsubstantiated rumor.

He went on to name several other false sources that have been used recently and appealed to the media to document their news before reporting. He went into some detail about the impact of the press carrying propaganda for the enemies of Iraq and thanked “the friends” who have brought this to their attention.

Curt at Flopping Aces has the AP response.

Your Saddam’s Rule number is much too low. It’s generally accepted Saddam was responsible for about two million deaths from several wars and the usual repression (which itself is 100/day). Tat works out to 83K/year over hi 24 years or 228/day.

Since everyone calls the current violence a “war” it certainly seems fair to include’s Saddam’s near constant wars in addition to his day-to-day brutality.

A Jacksonian takes another look at the numbers coming from Iraq.