The Iranian religious police frown on couples mingling in public. 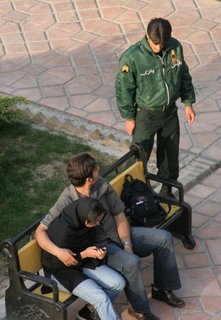 Stefania has more pictures from this “love arrest” at Publius Pundit.

While the regime in Tehran denounced the taser incident at UCLA, an Iranian student in Sabzevar was murdered for talking to his wife at a public bus stop.

Via Azarmehr and Middle East Times:

An Iranian university student talking with his wife at a bus stop was murdered by another student upset over a public conversation between the sexes, the ISNA student news agency reported Sunday.

Towhid Ghafarzadeh Nadi was killed in the northeastern town of Sabzevar, where his death prompted a protest march by students, ISNA said.

“The murderer questioned the couple over their relationship, which led to a violent scuffle, and the murderer stabbed his victim with a knife,” said the Office for the Consolidation of Unity, a reformist student group.

The man later told police that he “had acted because his religious sensibilities were injured by seeing a young man and a young woman talking in public,” the statement added.