This is just too strange…

After threatening to “Wipe Israel off the map” weekly for over a year, Iran is now complaining to the United Nations that Israel must cease and desist its threats against the Iranian state. 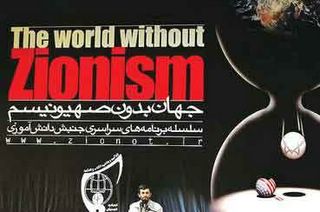 The Iranian regime is fed up with Israel’s bombing threats!

Iran, whose president has vowed to wipe Israel off the map, complained to the United Nations on Wednesday that the Jewish state was repeatedly threatening to bomb it.

The threats were “matters of extreme gravity” and the U.N. Security Council should condemn them and demand that Israel “cease and desist immediately from the threat of the use of force against members of the United Nations,” Iranian U.N. Ambassador Javad Zarif said.

His comments came in a letter to U.N. Secretary-General Kofi Annan dated Nov. 10 and circulated at the United Nations on Wednesday.